Meet The Baseball Fan Who Caught a Foul Ball With Her Beer, Then Chugged It 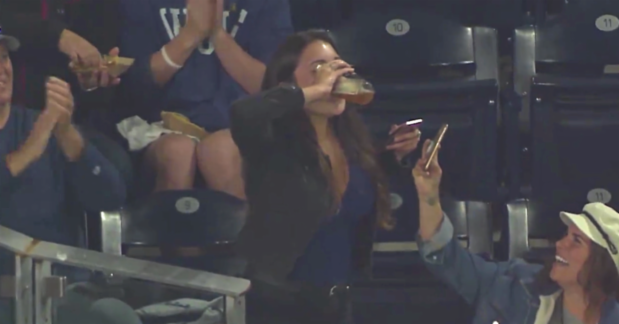 Beer — and baseball — served to your seat at @Padres games 🍺⚾️ pic.twitter.com/zCh3HjeUyD

A San Diego Padres fan has become Internet famous after she caught a foul ball in her beer…then chugged it like a champ.

San Diego native Gabby DiMarco was watching her hometown Padres get schooled by the Atlanta Braves when Ender Inciarte hit a high foul into the stands.

The now-viral video above shows the epic moment that DiMarco snagged the ball in her cup, and proudly hoisted it high for Petco Park’s Jumbotron, becoming an instant hero to baseball fans and beer lovers everywhere.

The woman seated next to her filmed what might be the most American chug ever from a second angle.

When the baseball lands in your beer cup in front of everyone…you chug it! Good call @Mudcat55! ⚾️🍻(via Gabby) #Padres pic.twitter.com/f4AfjO96sH

“It bounced from behind me,” DiMarco told MLB.com. “I wasn’t trying to catch it at all, and it landed in my cup.”

She quickly went from fielding foul balls to marriage proposals after the clip blew up on social media: