“I know that I definitely could do it, because anything I set my mind to do, I can do it.” 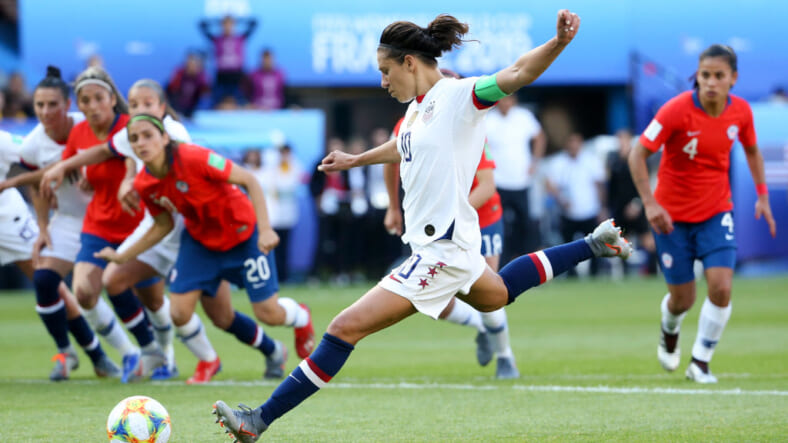 Could the NFL go co-ed? If the viral response to video U.S. women’s national team star Carli Lloyd perfectly splitting the goalposts with a 55-yard field goal at a Philadelphia Eagles practice session is any indication, it’s not completely out of the question.

Speaking to NBC Sports Philadelphia, Lloyd—a two-time gold medalist and two-time FIFA player of the year—indicated she was shocked the video took off but she also had no doubt about her ability to kick in the NFL.

“This totally took me by surprise,” Lloyd said of the huge response to footage of her field goal.

“I know the power of social media,” she said, “I get that, but I just casually brought my boots to Eagles practice, did a few kicks, nailed a 55-yarder on my first try and next thing I know everything’s blowing up, and I was laughing about it with my husband at first, but now I’m sort of entertaining the idea.”

Lloyd is a pro athlete and understands that confidence has to be supported with training. “I think I definitely could do it with the right practice and the right technique and get my steps down and figure all that out,” she told NBC’s Gregg Murphy.

Lloyd went on to say she was sure she “definitely could do it because anything I set my mind to do I can do it—and I actually do kick balls for a living. So, yeah, it’s all about the technique, and we’ll see what happens, but I’m now entertaining the idea.”

Fox Sports reported Tuesday that Lloyd “has been offered the chance to make history by becoming the first woman to play in a National Football League preseason game,” according to her trainer, James Galanis.

However, while Lloyd was genuinely interested, the matchup on Thursday conflicted with a United States women’s national team game against Portugal. Galanis declined to name the football team in question. Each of the 32 NFL teams have their final preseason exhibition games on Thursday.

It still could happen, though. Galanis continued, “We are definitely thinking about it. Knowing Carli, this is why it is enticing for her, because it is a challenge. That’s what Carli thrives on, it is the next thing she can conquer. That’s why we have had half a dozen conversations about it in less than a week.”

There’s always the question of the size disparity between the undoubtedly fit but 5’7″ Lloyd and the kinds of 6’3″ to 6’6″ behemoths who might come charging in a regular game. But Tampa Bay Buccaneers placekicker Cairo Santos (for example) is just an inch taller than Lloyd—and kickers are often the slightest members of any NFL team.

But not everyone was so gung-ho of her chances in the NFL. Los Angeles Chargers wideout Keenan Allen said she’d be a liability if one of her kicks didn’t get past the line of scrimmage.

Sound sweet til somebody block the kick and all of a sudden she on defense😂. Would be like the stampede scene in the lion king movie 😂😂 . She do got a boot tho! https://t.co/K8VxnHp6gB

“Sound sweet til somebody block the kick and all of a sudden she on defense,” Allen wrote. “Would be like the stampede scene in the lion king movie.”