“It wasn’t just for fun, it was for a really good cause.” 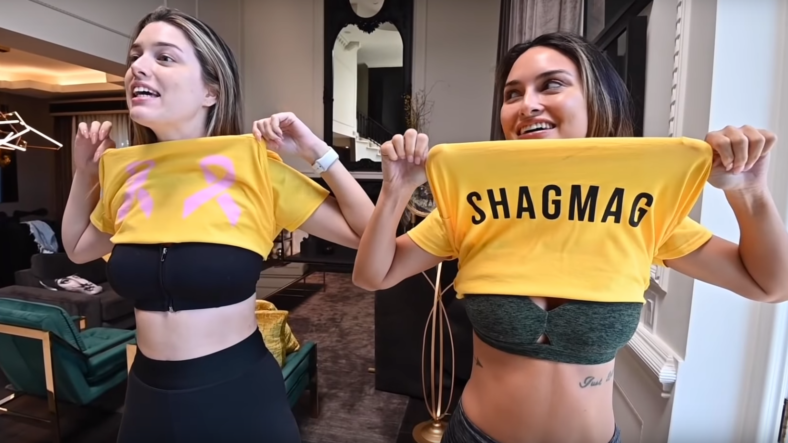 The internet-famous flashers who flashed their breasts during Fox’s live broadcast of Game 5 of the World Series say that stadium officials nearly foiled their racy stunt before it could unfold.

Instagram model Julia Rose dropped an 11-minute behind-the-scenes video showing her and two friends, Lauren Summer and Kayla Lauren, preparing to expose themselves at the game when representatives confronted them.

“So representatives just fucking pulled us out of our fucking seats, said they know who we are, they don’t know what’s going on,” Rose says in a portion of the video recorded Sunday night at Nationals Park in Washington, DC. “But we have to wear our jackets closed.”

In the video, yellow shirts branded with Rose’s “SHAGMAG” publication and the pink breast cancer awareness ribbon can be seen. According to the New York Post, the trio spent two days planning the flash before the game. The begging of the video shows Rose scoring pricey tickets for seats behind home plate.

“We’re going to flash our tits at the World Series!” she screams. “I’m so fucking nervous.”

Later in the video, Rose and her bodacious buddies are seen wearing the shirts at the game before security pulls them from the crowd for showing their breasts.

“We’re getting escorted out of the World Series right now,” boasts Lauren shortly before the video cuts to an official serving them a letter that details their life-long ban from Nationals Park.

That could have been anticipated. But Rose was particularly disappointed that the “SHAGMAG” label and breast cancer ribbons weren’t visible in the cameraman’s shot.

On Monday, she told the Post that she aimed to boost Shagmag subscriptions and raise breast cancer awareness. So basically, everyone wins.

“We have no footage besides half of our bodies on Fox,” Rose said. “So, our mission here in Washington, DC, didn’t go as planned, but it’s not going to stop us. It wasn’t just for fun, it was for a really good cause.”

Meanwhile, the other viral star of Game 5 is faring better. Jeff Adams, aka “Bud Light Guy,” received tickets to Game 6 of the championship battle between the Houston Astros and the Washington Nationals courtesy of the beer brand.

Update: We are in contact with our hero. He’s wearing this beauty to Game 6. pic.twitter.com/CobFG9q8kC

Adams heroically took a home run ball to the chest without  dropping either of the Bud Light tall boys he was double-fisting. He’ll be donning a t-shirt featuring a graphic of his memorable moment and a slogan that reads, “Always save the beers.”