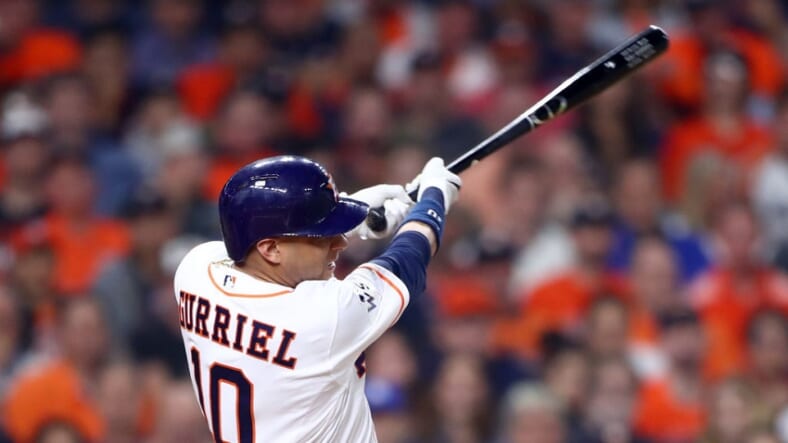 Houston Astros first baseman Yuli Gurriel pounded a home run in the second inning of World Series Game 3 Friday, scoring the first point of the game. Then he was caught on camera in the dugout being the worst kind of bad sport–a racist one.

He was seen making a “slant-eyed” gesture and saying the word “chinito” and it was obviously in reference to Dodgers ace Yu Darvish. It was worse than awkward, it was ugly.

Asked about it after the game–which the Astros won 5-3, taking the series lead–Darvish said Gurriel was “disrespectful.”

“I didn’t mean to do anything offensive." –#Gurriel. Yes, because we all know that doing this to an Asian is a universal sign of respect. pic.twitter.com/tfFO9ebyQU

Oh, one more thing: lots of these dudes are saying Gurriel doesn't know any better. Dude played in Japan in 2014. I think he knows.

Gurriel didn’t help matters after the game, either. As the New York Post reported, the Cuban-born player said he “didn’t mean to offend anybody in Japan.” He followed up by saying he had respect for the Japanese after playing there in 2014.

What he said next was ill-advised. “In Cuba, we call everybody who’s from Asia ‘Chino.’ We don’t call them Japanese. We call them Chino.”

You don’t have to be from Japan to think that sounds an awful lot like, ‘well, they all look alike to me.’

Gurriel did also say he planned to meet with Darvish, because he doesn’t “have anything against him.”

Hopefully the League will have something to say to Gurriel. Baseball has often been one of the more forward-looking sports when it comes to race. No one wants to see it take a step back now.