The legendary commentator was 76. 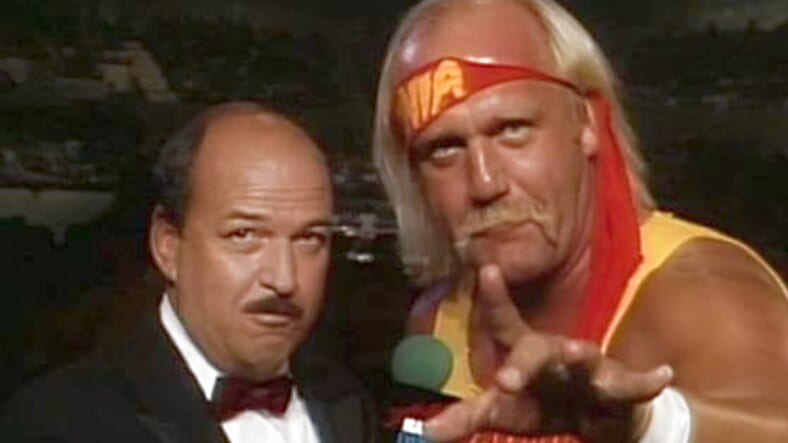 Pro wrestling will never be the same. Today names old and new are in mourning for iconic WWE announcer “Mean” Gene Okerlund. The WWE announced early Wednesday that the man who for so long owned the mic was dead, age 76.

Anyone who ever followed wrestling for any length of time saw Okerlund at work. In an obituary the WWE put it best, writing that he was “the most recognizable interviewer in sports-entertainment history.”

Big names like Hulk Hogan, who inducted Okerlund into the WWE Hall of Fame, and the Iron Sheik—the announcer was the best man at his wedding—quickly chimed in with expressions of sadness.

Mean Gene I love you my brother HH

RIP MY BROTHER GENE MEAN. YOU PUT ME OVER LIKE NOBODY. I LOVE YOU AND YOUR FAMILY SINCE THE MINNESOTA. GIVE MY BROTHER NIKOLAI BUG HUG. GOD BLESS YOU. CAMERA MAN ZOOM IT. pic.twitter.com/5k0VRXbKMI

Okerlund began his career in radio as a DJ at a station in Omaha, Newbraska. By 1970 he had found his calling as a wrestling commentator, according to TMZ.

His star began to rise in the 1980s. By the time he was hired by the WWE, he was a well-known name among various regional wrestling federations. His peculiar talent may have been—in addition to his instantly recognizable voice–handling every interview with stars like “Macho Man” Randy Savage or the Ultimate Warrior (see below) with utmost seriousness, no matter how badly things went off the rails. This clip of his interview with the Warrior is a perfect example.

Okerlund was such a constant it’s hard to imagine professional wrestling without him. Wrestlers and managers alike felt the same grief as Hulk Hogan and the Iron Sheik, tweeting about their regard for him.

A voice and sound track to an entire era of our industry. He was the star of some of @WWE’s most memorable segments. “Mean Gene” was beloved by all who got to work with him. Our thoughts are with his family at this difficult time. https://t.co/9ddj6372eE

Just heard Mean Gene Okerlund has passed away. As an interviewer, pitch man, announcer, or host, he was untouchable. Simply the best. Total professional with quick wit, sarcasm, humor, and that golden voice.
Condolences to his friends and family.

WWE universe has lost one of its greatest announcers and truly one of the nicest guys you’d ever know. “Mean” Gene Okerlund, RIP my friend pic.twitter.com/u3bS6pePmY

I am so sadden by loss of my very close friend @TheGeneOkerlund You brother were one of the truly GREAT ONES. You will be miss more than you know! I Love you Man! RIP Geno💎 @RealDDP DDP pic.twitter.com/gAmZCkYNrF

So sad to hear of the passing of our friend, Mean Gene Okerlund.
I'll always remember Gene with a smile on his face and a drink in his hand and always wanting to help. His was "The Voice" of @WWE RIP Gene. pic.twitter.com/tgS1Yy3VpA

Professional wrestling as a sport, as entertainment, is here to stay. But it will be a while before it recovers from losing a voice like “Mean” Gene Okerlund’s. RIP.