The XFL Revealed Uniforms For All 8 Teams, and One Look Is Getting Roasted Online

“Congrats, you’ve now got the worst uniform in the XFL.” 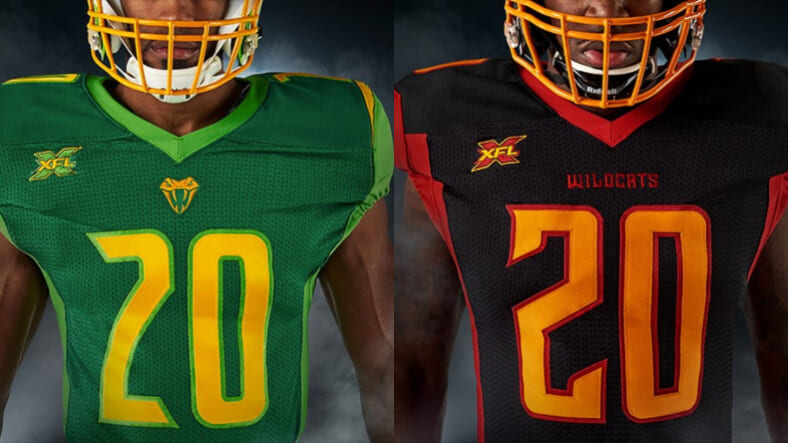 WWE magnate Vince McMahon’s reincarnated XFL just revealed all eight of the new professional football league’s team jerseys and helmet designs. Most uniforms admittedly look pretty slick, but one particular is getting ruthlessly roasted on Twitter—see if you can guess which one we’re talking about:

The uniforms the Dragons will be wearing while we're #BreathingFire 🔥🐲this season. pic.twitter.com/mXPsRuYr6q

THE WAIT IS OVER.

⚪️ Sentries carved in stone, watching above the metropolis

🔴 The burning ambition of our everyday heroes

As Bro Bible notes, the team colorway that’s facing the most ridicule is that of the Tampa Bay Vipers.

I've seen better uniforms come out of my ass #ClearedToEngage

— Honor the ancestors, fight like mad for the living (@oneptofview) December 4, 2019

Congrats.
You've now got the worst uniform in the XFL.

Some simply goofed on the flashy green hue, while others accused the Vipers’ of ripping off the Oregon Ducks’ uniforms.

So, like, Nike is surely going to sue Starter and the XFL for ripping of Oregon's uniforms, right?

McMahon’s resurrected league previously came under fire when it was reported that players would earn a yearly minimum salary of $55,000—a fraction of the NFL’s $495,000 minimum.

But money and looks aside, the XFL is officially happening. ESPN reports that the inaugural season kicks off on February 8 of next year. Each team will play five home and five away games by April 12, followed by one round of two playoff games held on April 18-19 and a championship game on April 26.