This makes no sense. 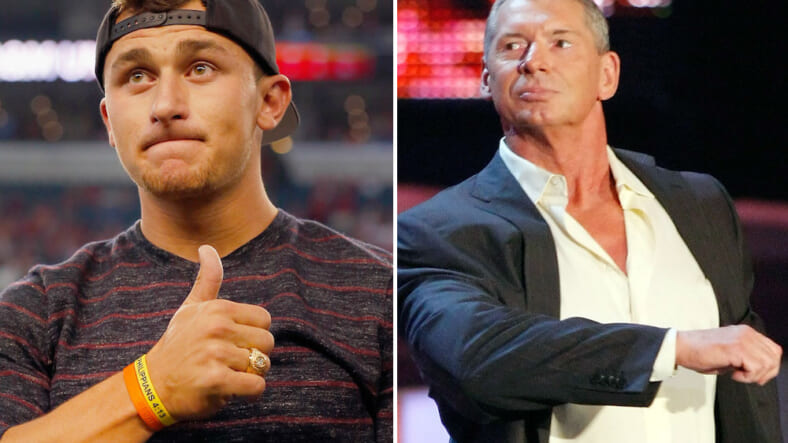 There aren’t a lot of marquee names Vince McMahon could attract to his newly-announced XFL—most football players of note already have jobs as football players—but there are a few. Among the names he’d bewise to woo are Tim Tebow, Colin Kaepernick and Johnny Manziel, who was quick offer his services to the nascent league on Thursday.

It’s hard to imagine a more perfect pairing. Manziel already has big-time name recognition and a WWE-style persona. And despite his inability to perform in the NFL, he torched lesser competition in college and would be likely do the same to the weekend warriors McMahon recruits to play minor league football.

There’s one problem though: Manziel isn’t the most well-behaved boy. And McMahon on Thursday said the XFL will ban anyone convicted of any crime.

“We are evaluating a player based on many things, including the quality of human being they are,” McMahon told ESPN. “If you have any sort of criminal record or commit a crime you aren’t playing in this league.”

He reiterated the point when talking to reporters, saying “the quality of the human being is very important.”

Manziel took the news well enough, joking that he’d soon be applying for a job at Barstool Sports, but you have to wonder if  McMahon might reconsider. Excluding every potential player who’s had a scrape with the law would be bad for business. It would also be going against his declaration of the XFL as a “fan-centric” league. Fans care far less about a player’s off-the-field behavior than his ability to play the game.

But as McMahon said, he’s trying to let people reinvent the game.

“What would you do if you could reimagine the game of professional football?” he asked in his announcement. “The new ZFL will be fan-centric with all of the things you like to see and less of things you don’t, and no doubt a lot of innovations along the way. We will present a shorter, faster-paced. family friendly, and easier-to-understand game.”

Or, if you’d prefer to hear the same explanation in a poorly-performed rap, check this out.

Calling McMahon’s plan ambitious would be a wild understatement. It’s not at all clear what a safer, faster, less complicated version of football would look like. And it’s even less clear that anyone would watch it if it ever did exist.