This is just brutal as hell. 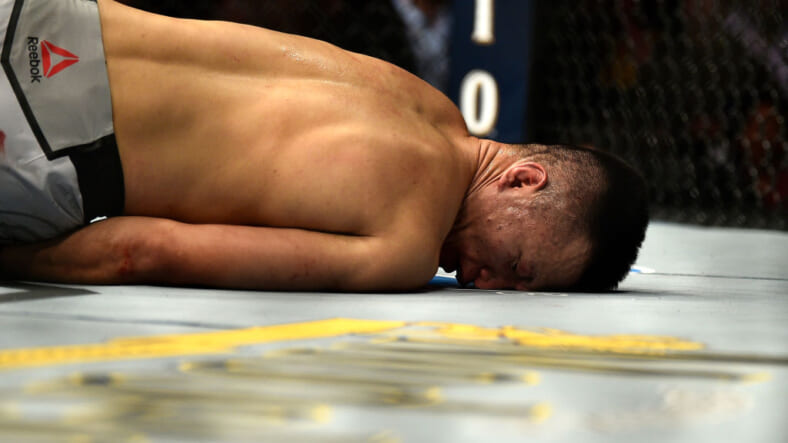 Footage of vicious MMA knockouts is never easy to watch. Something about this clip of the final second of the final round of the UFC Fight Night 139 match between featherweights Yair Rodriguez and “Korean Zombie” Chan Sung Jung is particularly hard to take.

Part of what makes it difficult to watch is knowing that Chan was on the verge of winning.

The fighters were in the final moments of round 5 when Rodriguez pulled a strange move that seemed to throw Chan, throwing his hands up as if the match was over. Chan responded then they regrouped and began fighting again, Chan coming hard at his opponent, ready to close the deal.

He came in with a monster left hook that missed. His momentum carried him into Rodriguez’s thrust elbow and that put out the lights in—literally—the last second of the match.

The knockout was so thorough there was some initial worry Chan wouldn’t get up again.

For his part, Rodriguez was exhausted and looked for a moment like he wasn’t in any better shape than Chan. He was, though, because he won.

He later gave a respectful callout to his featherweight opponent on Instagram, writing “Thanks to @koreanzombiemma for a war and for the respect given by his team, all my respect and admiration.”

Rodriguez’s elbow jab was so sharp it likely caused sympathetic pain in many viewers’ jaws, and it was about as epic as the UFC can get. Outside, the UFC, though, it still may have competition for knockout blow of the year from this wicked spinning elbow in a South African Extreme Fighting match over a week ago.

Torbjorn Madsen was on the receiving end of that elbow delivered by Mzwandile Hlongwa, and Madsen later termed the whole thing “fun.”

Seems like a sure bet Chan Sung Jung didn’t feel like he was having fun. Actually, for a minute or two he wasn’t feeling anything at all.