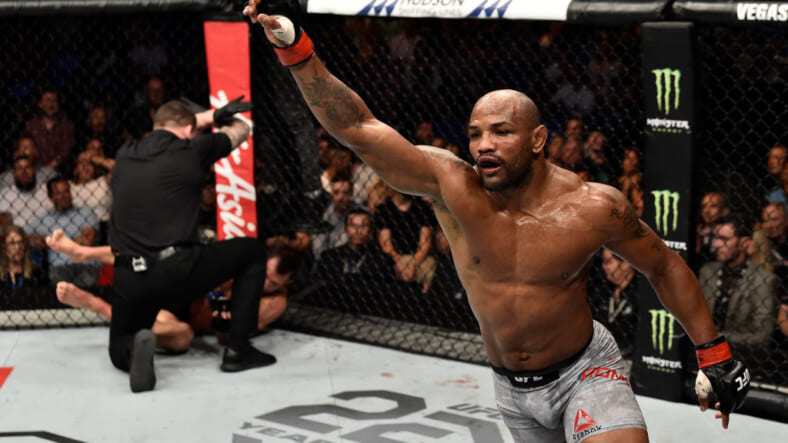 It’s one thing to decisively clobber your opponent in the third round of a major fight. And as Yoel Romero knows after UFC 221, it’s another thing to not even get a belt out of the deal.

Romero’s thundering power with either hand was on display in his bout against Luke Rockhold Saturday in Perth, Australia. But unfortunately for him, his two-pound weight overage at weigh-in ensured no belt was on the line. He weighed 187 compared to a limit of 185.

Romero made an impression, to say the least. While Rockhold had the power and endurance to hold him off for three rounds, it was close to the two-minute mark in round three when Romero saw a clear advantage, some kind of momentary lapse in Rockhold’s concentration. He pounced with a big clubbing overhand left then a sharp right uppercut and the match was over.

Romero explained the weight overage after the match. “I am so sorry, for cutting weight is so bad for me,” he said. He continued by admitting that for “the first time in my career it shut my body down.”

It wasn’t the most speedy match in UFC history. The men circled each other and took their time. Though Romero strategically worked Rockhold’s legs at first, Rockhold was initially landing better punches.

Turned out that Romero was biding his time. He turned it up in round two, wearing his opponent down, softening Rockhold up for the kill, so to speak.

He indicated after the match that he respected Rockhold, calling him “a very good athlete and great fighter.” He noted that Rockhold had been Strikeforce champion but said he was happy. “I fight for the best in my division,” Romero said.

Romero now holds a 13-2 record compared to Rockhold’s 16-4—and Rockhold now appears to be on something of a losing streak.

He may wish he’d faced Robert Whittaker, originally slated to defend his title. Whittaker had to cancel due to health reasons.

With @YoelRomeroMMA in the hospital. Leg is fine people couple weeks and he will be good to go

Will Romero end up fighting Whittaker instead? Despite his impressive showing, post-fight it was clear he was hurt. An early report indicated he might have broken a leg, but a tweet from his manager indicated he’d be fine.

At the moment, the battle for the middleweight belt is up in the air.