These limited-edition kicks are made for throwback video game fans. 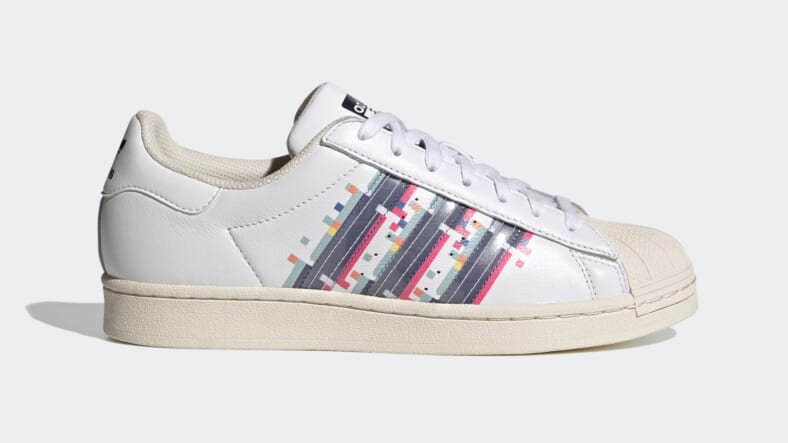 The four-sneaker capsule is headed by the Superstar in premium full-grain white leather. The centerpiece appears on the upper, where the German athleticwear giants’ famed Three Stripe logo is shrouded with blocky pixels in RGBK and gray. A similar 8-bit-0inspired design appears on the insole, while an era-specific rubber toe shell and Adidas Originals Trefoil on the tongue top off the Gaming Pack Superstar.

Next up is the Ozweego. Hypebeast reports that a “Collegiate Navy” and “Cloud White” colorway graces the upper and proprietary adiPRENE elastic midsole, but patches of HD 3D-style rectangular graphics are used on the toe and heel cup.

An ZX 2K Boost gets the same core colors as the Ozweego but reversed, with Cloud White being the dominant hue on the upper and midsole. The 3D rectangular blue graphics appear in the mid-panel and heel, with the white Three Stripes featured in a clean, uninterrupted treatment.

Rounding out the Gaming Pack is an NMD_R1 in “Core Black.” Again, the blue 3D graphics are presented, but in patches located the heel and below the black Three Stripes, which are surrounded by a blue-green graded highlight. The rubber rectangle pieces that creep over the top of the black outsole and onto the upper on every NMD_R1 silhouette appear in mint green and blue.

The Adidas Originals Gaming Pack drops online on January 7, with prices ranging from $90 to $150.