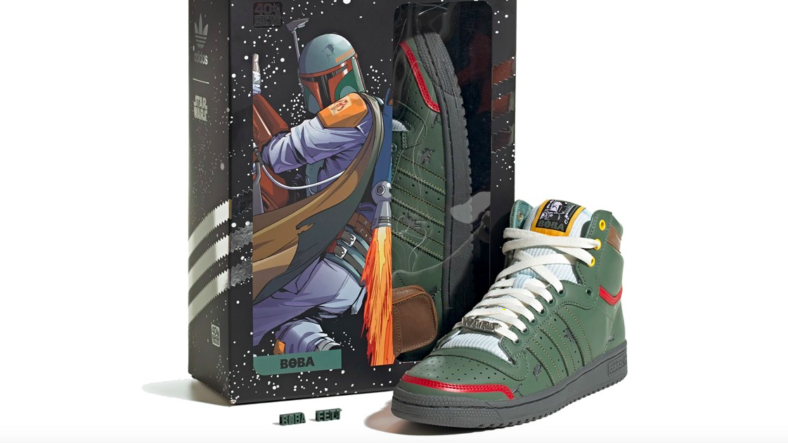 Adidas has collaborated with the Star Wars entertainment juggernaut to celebrate the 40th anniversary of The Empire Strikes Back, which premiered in 1980. They’ve done it with a pair of Top Ten Hi sneaks inspired by infamous bounty hunter Boba Fett. Hell, these kicks look like they were stolen from Fett’s closet.

And they would be a great match for Fett’s armor, as Adidas even went to the trouble to distress the olive green high-top uppers. Wears and tears designed to complement the famous triple stripe symbol can be seen on both sides of the shoes, which are also—like Fett’s Mandalorian-style helmet—trimmed in red.

The yellow holes for the laces at the top of the shoe also mirror Fett’s color scheme, but Adidas didn’t stop with merely coloring and weathering—the Top Ten Hi “Boba Fett” comes with a pouch attached to the collar, one just like the bounty hunter carries on his utility belt.

The blue tongues sport a “Boba” tag and are textured. Complementing the overall scheme is Fett’s badge just above the heel and gray, steely outsoles and midsoles.

For old-school fans, Adidas has gone the extra parsec (calm down, nerds, we know the word is used incorrectly in the movies) and packaged these kicks in a collectible box reminiscent of the first Star Wars toys released when A New Hope premiered in 1977.

Adidas is releasing the Star Wars x Adidas Top Ten Hi “Boba Fett” for the equivalent to $111 USD on September 24 in the sportswear brand’s UK webstore.