The former Oasis frontman rocks out with a new signature Adidas line. 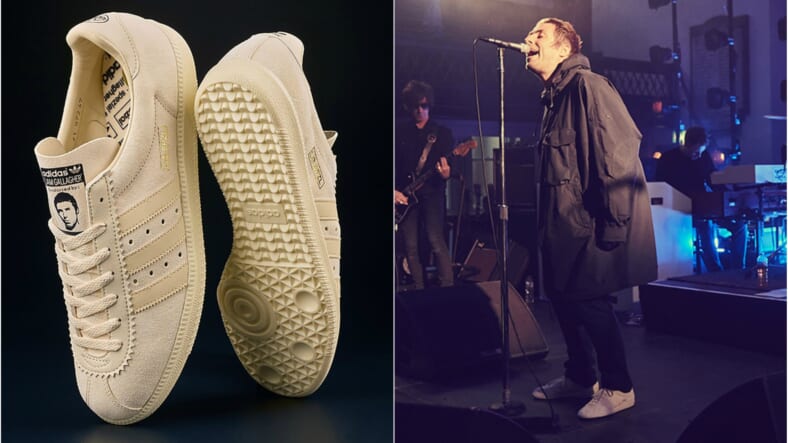 Oasis singer and low-key 1990s fashion icon Liam Gallagher has teamed up with Adidas to create a limited-edition signature sneaker that’s inspired by his own personal style.

The LG Spezial kicks feature a new silhouette that’s based on the lesser-known Adidas Padiham Spzl, and has a cream-colored suede upper, tonal leather detailing, and a rubber midsole and outsole.

“LG SPZL” is printed in gold lettering on the side of the shoe, and Gallagher’s face is stamped on the tongue, Stan Smith-style.

“Best looking motherfucker on the planet, best fucking looking trainer on the fucking planet,” Gallagher declared in a video on Instagram after seeing his sneakers for the first time.

Gallagher, who also popularized parkas, soccer jerseys and circular sunglasses during Oasis’s chart-topping reign in the 1990s, has long been a fan of Adidas.

His signature kicks were released on August 30th to coincide with Gallagher’s new solo album Why Me? Why Not? coming in September. But fans quickly snatched up the limited-edition trainers, and they reportedly sold out in less than 10 minutes online.

While the LG Spezial isn’t in stock at Adidas right now after having sold out so fast, plenty of people are reselling them on eBay for astronomical prices if you’re interested.

In the meantime, fans can always wait and see if the Foo Fighters’ tongue-in-cheek bid to get Liam and brother Noel Gallagher to reunite Oasis will ever happen.