Airbus Is Installing Bunk Beds on Passenger Planes By 2020, But There’s a Catch

Would you sleep in one of these flying pods? 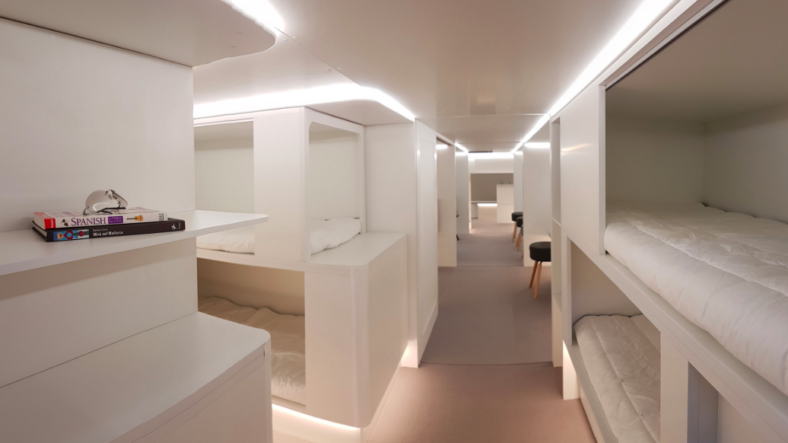 Sick of trying to catch some z’s in cramped airline seats? There’s now a plan to install spacious bunk beds in passenger planes for long-haul travelers to snooze in

Airbus partnered with France’s Zodiac Aerospace to create sleeper berths for Airbus A330 jets, which will be available to airlines by 2020.

The only catch? The European airplane maker’s flying slumber pods will be located in the cargo hold. Yup, you read that right.

The mini-cabins — or passenger modules, as Airbus and Zodiac describe them — will sit directly on the cargo floor and will not affect the loading of freight and luggage.

Airlines will be able to swap the sleeping modules in and out of planes in place of regular cargo containers, the companies said.

“We have already received very positive feedback from several airlines on our first mock-ups,” Geoff Pinner, head of cabin and cargo operations at Airbus, said in a statement.

Designs provided by the companies showed rows of double-decker beds on either side of a corridor. Mock-up drawings also showed larger spaces for families, medical care or meetings.

While the exact use and pricing of these sleeping cabins is yet to be announced, they are meant to be offered as an add-on option on long haul flights for travelers who want to get up from their seats and lie down, Airbus spokesman Jacques Rocca told CNN.

Passengers would have to buy a regular seat on the plane, and would pay extra for a bed at a price to be determined by the airlines. They would access the cargo hold via a staircase.

But don’t even ask for a window seat—there’s no windows in the cargo area.

Would you consider paying extra for your own sleeping pod?