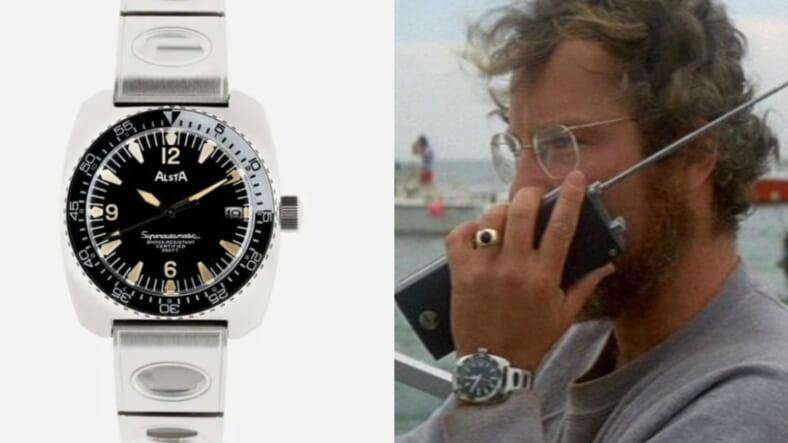 In Jaws, Richard Dreyfuss memorably played marine biologist Matt Hooper, who comes to Amity to help Chief Brody (Roy Scheider) determine what kind of shark is picking off swimmers and boaters around the island.

Hooper was a classically twitchy yet likable Dreyfuss character and one of his quirks was that as scruffy as he looked, he admitted being born into a wealthy family—a fact that seemed reinforced, to watch lovers, at least, by his obviously expensive timepiece, an Alsta Nautoscaph Superautomatic dive watch.

The provenance of Hooper’s watch was a source of mystery for collectors and obsessives for decades. Finally, a pair of cybersleuths figured out in 2010 that the character was sporting a Nautoscaph made by Alsta, a company that went under not long after Jaws became a megahit in 1975, having fallen prey to what watchmakers sometimes call the “Quartz Crisis.”

Alsta came back from the dead in 2014, and the “Jaws watch” was why. From the company’s “About” page:

[After] two years in the making, our first wristwatch for over 40 years was released in 2017. We were inspired by the Nautoscaph dive watch as worn by Richard Dreyfuss as Matt Hooper in the classic movie, Jaws and we chose the Nautoscaph II to revive and lead the resurrection of Alsta in the 21st Century.

But they didn’t release an identical Superautomatic to the one on the actor’s wrist until now, in response to repeated requests. The company says they were “asked weekly by the community of Alsta enthusiasts” about a new Superautomatic but they wouldn’t put it on the market until they were certain they could “execute the watch that we knew enthusiasts wanted.…using modern technology.”

While the new Nautoscaph is identical outwardly to the “Jaws watch,” Alsta has increased the case size and given it an updated automatic movement (Seiko NH35A, 24 jewels).

More specs below, from the Huckberry listing for the timepiece:

To commemorate the year Jaws premiered there will only be 1975 pieces sold. Pick yours up at Huckberry.com or Alstawatches.com for $1,150.