The globe-trotting lensman risks it all to capture the perfect shot. 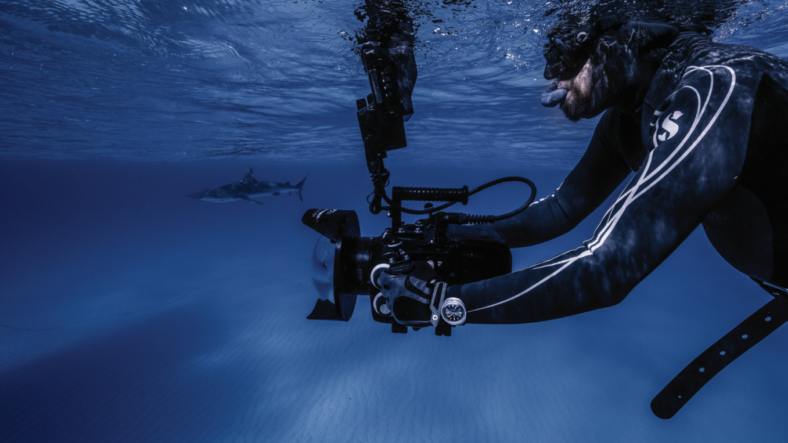 At its best, photography allows the artist to transport his audience to wherever he can carry his camera. Some destinations are so remote, or so dangerous, that photography is perhaps the only medium through which others can learn about those places and
experience them vicariously.

Growing up in rural Virginia, the 38-year-old Mann didn’t find his calling until 2003, when he moved to Colorado and discovered rock climbing. He began hanging out with now-famous adventure photographers like Keith Ladzinski and Cory Richards, and the group sustained its mountain-based habits by selling photos to niche magazines, and eventually to National Geographic.

“It was a tool to not only tell the stories of what I was doing but be able to fund the
passion, to just stay on the road,” he explains to Maxim.

Stay on the road he did, as he spent the next decade traveling the world, photographing some of the most challenging walls in climbing. As big companies like the North Face and Red Bull began
pouring money into outdoor adventure campaigns, Mann knew he had the skill set to balance his art with commerce.

“I’ve always had a knack for pitching and working with brands to create a campaign around authentic expedition storytelling,” he says. “I think that’s what brands want, but it’s also the hardest thing to create.”

Mann’s work is, in fact, as logistically challenging as it is authentic.

“I go to Greenland to do a climbing expedition every other year, because it takes literally two years to even go there and get to hire Inuit hunters to do drops for you in the winter. So the logistics
are crazy, but the further out it is, the more interested I am in
documenting it.”

“For me, as far as what I’m looking for, it’s still real moments. The better you are as a photographer, the easier it is to simulate moments. But those don’t interest me. I’m looking for real, authentic moments, and that’s why I go out for a month or two at a time, or I’m on the ocean for a hundred days a year.”

“I’m looking for the same thing with wildlife, too: something that’s special and unique that’s not an image that you could just go get without either a ton of time and patience or incredible luck.”

And at the moment, Mann seems to be the photographer both audiences and brands are looking for. He recently became an official ambassador for Zodiac watches, but as is the norm with him, it
began as a partnership and not a gig.

He already knew some of the Zodiac team from a previous commercial project, and when the first campaign for the brand’s impressive Super Sea Wolf timepiece was
decided as an open-water diving shoot with oceanic whitetip sharks, it seemed like a perfect match. It was a show of trust from both sides, as Mann recalls.

“[Zodiac] took a huge leap of faith to just say, ‘All right; we’ll book the flights and then let the magic happen.’”

As for Andy, he took a different kind of leap. “The oceanic whitetip is not a shark people typically free-dive with, or you can get in the water with, because they’re considered one of the most dangerous,” Mann explains.

While he’s been diving with 50 bull sharks in Fiji, shot many of the hardest rock climbs, and had a Moby-Dick–esque, terror-inducing experience with a pod of massive sperm whales surrounding him off the Azores in the Atlantic, Mann also finds great risk in the human realm.

“I was on assignment for National Geographic in Russia, and we were diving under an iceberg when it flipped and almost took the whole team down with it.”

“Then we got back to port and were taken ransom [by the Russian mob]. Right on the dock: taken away! Then [they]
negotiated my release. I thought, Jeez, what have I gotten myself into?
It’s safer in the mountains!”

Like his fellow adventure and ocean photographers, Mann takes a calculated approach to risks, which he believes keeps him from crossing the line from risky to unwise. But the backbone of his
motivation is the meaning he ascribes to his work.

“I want my work to serve a purpose. And so I align myself with scientists and marine
biologists…and they come to me with these great ideas, so that gives me access. It’s a place that needs imagery, and these scientists need the assets to communicate the change of policy. But it also gives
my work purpose.”

Another prime motivator is the opportunity to break new ground.

“Working with athletes that are doing something for the first time, or going to a place that’s never been climbed, or a place where people have never been, period,” Mann explains.

“There’s a lot of
virgin earth out there, places people have never been, so that’s who I’m aligning with on either side of that coin. Like the scientists, they’re giving me access to what I need.”

Andy Mann doesn’t appear to need all that much, it turns out. Give the man a camera, a plane ticket to somewhere remote, and enough support to keep him alive in the extreme places he ventures to and he’s likely to return not only with a collection of beautiful
images but purposeful shots unlike any we have seen before.