Business in the front, party in the back. 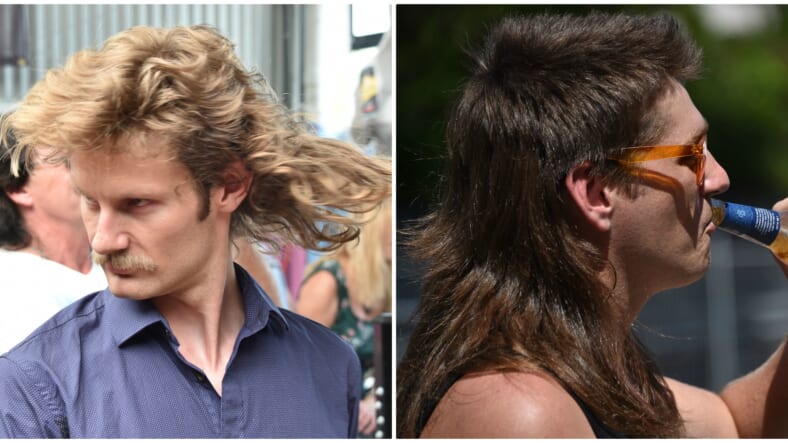 A few days ago in the small town of Kurri Kurri, Australia, the greatest festival in the history of the Universe took place: Mulletfest.

But before I take you any further into Mulletfest, I need you to know that what you’re about to read all but requires the following soundtrack, so I highly recommend you press play.

See? I told you. It’s only fitting.

As the name clearly states, Mulletfest is an event dedicated to celebrating the mullet, a.k.a. the most incredible hairstyle since the dawn of humankind, with a nice, cropped front, and luscious long locks in the back, synonymous with the expression: “Business in the front, party in the back.”

At the festival, proud mullet wearers gathered at the Chelmsford Hotel not only to honor and appreciate “the mullet lifestyle,” but also to crown the “Best Mullet of Them All.”

Over 150 contestants entered the competition, and were ranked in five separate categories: everyday, grubby, “ranga” (ginger mullets), women’s, and juniors.

Hilariously, there was only one entry for the women’s division: an 11-month old infant. But better yet, the winner of the juniors division, 12-year-old Alex Keavy, says he’s going to use his $50 prize money to buy his girlfriend a pie. A true gentleman!

Here are some of the contestants proudly posing for glamour shots:

The winner of the coveted title of “Best Mullet of Them All 2018” was Shane ‘Shag’ Hanrahan and his impressive waist-length mullet that he’s been growing since 1986.

“This is the first trophy I’ve ever had. I can’t believe it,” he said, and proceeded to chug Jim Beam from his trophy to celebrate this victorious milestone in his life.

However, Mulletfest wasn’t all fun and games. One festival-goer ended up in the hospital… when he broke his leg going to KFC after the festival. Uh oh! Wishing him a speedy recovery!

How was your weekend? This guy is still feeling the love for Mulletfest even though his weekend ended kinda crap… “Reps mulletfest, triathlon the next day and breaks a leg riding to KFC… straya🤙🏼😂” #mulletfest2018 #chellyhuntervalley #exerciseisdangerous @da20le

While it’s debatable when and where the mullet first became popular, Kurri Kurri is assuming the unofficial title of the birthplace of the mullet, which is why the town decided to host such a festival.

“Here in Kurri, we believe that we actually created the mullet,” says Laura Johnson, who owns the Chelmsford Hotel. “We’ve had it the longest and we thought we would give our locals a chance to strut their stuff and see, not only if they’ve had it for the longest, but if they’re still up with current trends and rocking the mullet.”

Well, good taste never goes out of fashion, amirite?? If only more people could see how sexy mullets are, the world would be a better place. Fingers crossed Mulletfest becomes an annual event, because I literally cannot get enough of this.