Because heroes can look good, even without their capes 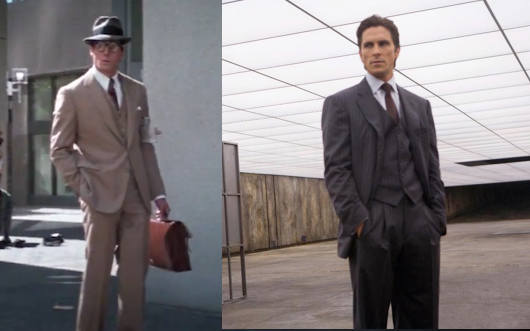 Batman and Superman are two of the world’s most recognizable superheroes, legendary icons whose stories across comics, television, and the silver screen have inspired and captivated millions since their introductions in the late 1930s. And while these two heroes are known pretty much universally, we’d venture a guess that people know a bit less about the men behind them: Clark Kent and Bruce Wayne.

Before the Dark Knight and the Man of Steel meet together for the first time on the silver screen this Friday in Batman v Superman: Dawn of Justice, we’re going back in time and taking a look at the off-duty stylings of Christopher Reeve’s Clark Kent and Christian Bale’s Bruce Wayne. In the spirit of the movie itself, we’ve pitted the two against one another across five menswear categories: three-piece suits, knitwear, formalwear, jackets, and outerwear. And if you don’t trust us, we tapped menswear designer David Hart and wardrobe stylist Brooke Llewellyn to offer up their opinions.

Who will come away with the win: the billionaire playboy and philanthropist? Or the mild-mannered reporter?

Christian Bale’s Bruce Wayne donned a wardrobe’s worth of Giorgio Armani, as the designer served as the exclusive tailor for The Dark Knight (2008). Yet, not even an Italian master can save Bruce Wayne from regrettable mid-2000s suiting trends — those pleats make him look like he’s wearing a pair of parachute pants.

Meanwhile, Christopher Reeve’s Clark Kent from Superman III (1983) appears to be of a more modern era than Bale’s. “Although [this] suit was probably purchased straight off the rack, it’s got an easy wearability that transmits an effortless cool,” said Hart. What’s more? Khaki suiting has made a strong return over the last few seasons, and Reeve’s repp tie, well, ties the whole suit together.

When Clark Kent is attending his reunion at Smallville High School in Superman III, he looks like he’s back at his prom. The ivory dinner jacket is definitely a bolder style choice for someone who spends a considerable amount of time dressing to deflect attention from himself, but the jacket is also a lot longer than the modern cuts we’ve seen. The lapel flower doesn’t do much to deter from that “back in line at the punch bowl” feeling.

Meanwhile, this is the classic Bruce Wayne look we all know and love. The details of the tuxedo — the perfect amount of french cuff, the just-right sizing of the bow tie, the peak lapels, the buttons on the shirt — all make Bruce as bulletproof among Gotham’s elite in Batman Begins (2005) as he is in the Batmobile. He takes this round. Brooke Llewellyn concurs, “This black peak-lapel tuxedo on Bruce Wayne is undeniably striking. It’s tailored perfectly, looks elegant and exudes rich, which of course he is. This is the epitome of formalwear here, folks. It’s perfection.”

Bale’s wool sweater, anchored by a chambray shirt and tie combo, is certainly less flashy than the clothing we see him wear after his decision to embrace the Bat in Batman Begins. But the look is the perfect combination for a Bruce Wayne who has just been kicked out of Princeton.

Reeve’s notched shawl cardigan from Superman III looks heavy enough to wear alone come early fall. When combined with the pants and the pop of the powder blue oxford, Clark Kent is making a bold statement with his tonal ensemble, giving him a slight edge over Bruce Wayne’s Ivy League timelessness. David Hart agrees, saying that “Clark plays up the intellectual style with great button front knit cardigan jackets. It’s an easy look for him to sit at his typewriter and crank out articles for the Daily Planet.”

Clark Kent’s barracuda jacket (seen in 1981’s Superman II) stays in line with a lot of the khaki choices we’ve seen him wear, yet it looks as stylish on him as it did on Steven McQueen. Meanwhile, Bruce Wayne’s return to a Gotham under siege in The Dark Knight Rises (2012) brings us a bomber jacket that has as many pockets as his utility belt. It’s a tough call here, but the bomber jacket’s recent resurgence has proved it is a must-have piece for the modern man. Mr. Wayne sneaks away with the win here.

Coats are the closest thing to a cape a person can wear, so it’s fitting some outwear pieces are included before this sartorial smackdown is all said and done. Clark Kent’s raincoat from Superman IV: The Quest for Peace (1987) looks similar to a standard trench, but has some great details that help it stand out — most notably the epaulets and the belt. However, Bruce Wayne’s tweed topcoat was so beloved in Batman Begins that it gets written into the film, providing the punchline to one of that movie’s best jokes. A topcoat like Bruce’s is the kind of staple that can last you through three seasons with some proper layering underneath — essential for Gotham’s harsh winters.

Llewellyn confirms, “Zero tailoring, bought off the rack, could possibly be thrifted or one of his father’s coats. I love this choice, especially paired with the muted outfit and messenger bag slung just so. Collegiate, a bit frumpy, it totally works.” And so Bruce takes the final category.

The Dark Knight of Gotham gets the victory, winning 3–2 over Clark Kent. There’s plenty of great styling lessons to be taken away from both Mr. Kent and Mr. Wayne here. And, plenty of proof that you don’t need a supersuit to dress like a superhero.