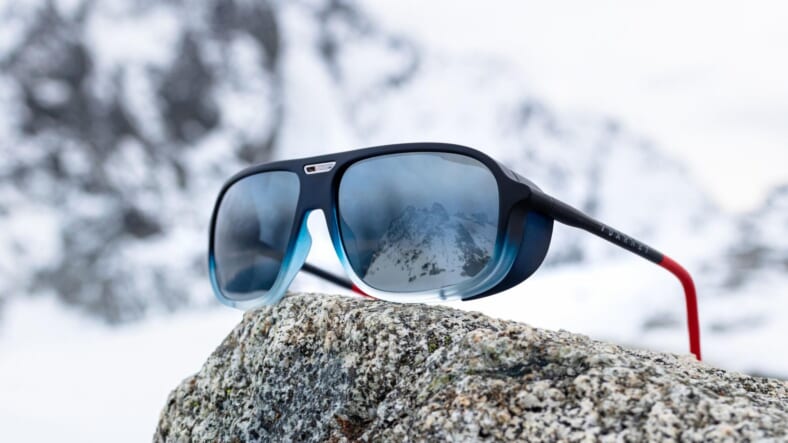 Back in 1957, Roger Pouilloux, a pioneering French optician and skiing enthusiast, offered a pair of sunglasses he made to French skiing champion Jean Vuarnet, who wore the now-iconic shades, later known as the Vuarnet 02, while winning the gold medal in downhill skiing at the 1960 Winter Olympics. Following Jean Vuarnet’s historic victory, the two men decided to create a sunglasses brand called Vuarnet, and an optical legend was born.

With the 02 model as its emblem, Vuarnet went on to become a leading premium sunglasses brand that still manufactures their signature mineral glass lenses at a production facility outside of Paris. Vuarnet shades feature the very best optical clarity and maximum protection against damaging effects of the sun–including UV rays, infrared and blue light. They’re also renowned for extreme durability and for delivering the ultimate in visual comfort. And they’ve long been a favorite of cool cultural influencers, including jazz legend Miles Davis, Daniel Craig’s 007 and The Dude in The Big Lebowski.

The 02, contrary to what its name suggests, was actually the very first sunglasses model in Vuarnet’s history. Vuarnet wore these groundbreaking shades with the brand’s signature Skilynx tinted glass lenses when he captured gold at the 1960 Olympics, and they’re still a great pick for game-changers everywhere.

After Jean Vuarnet’s Olympic victory, the United States military became a source of inspiration for the brand. Launched in 1962, the 03 model is inspired by the sunglasses worn by US Air Force pilots with its straight lines and oversize square shape. These versatile frames ascended to cult status after Jeff Bridges wore them as The Dude in The Big Lebowski.

The timeless 06 model has been rocked by everyone from Alain Delon in the classic 1969 thriller La Piscine to Daniel Craig as James Bond, who wears the 06 during his final turn as 007 in No Time to Die.

After Vuarnet debuted the Glacier in 1974, it was adopted by leading alpinists including Jean Afanassieff, the first French climber to conquer Mount Everest. The Glacier’s popularity has since expanded far beyond elite alpine athletes. Jazz great Miles Davis regularly wore them onstage, most notably during his last concert in Paris in 1991. More recently, the Glacier was worn by Daniel Craig’s James Bond in Spectre and Jake Gyllenhaal in Everest.