Why Bijan Remains ‘The Most Expensive Store in the World’

Nicolas Bijan is continuing his father’s legacy by catering to a new generation of global billionaires. 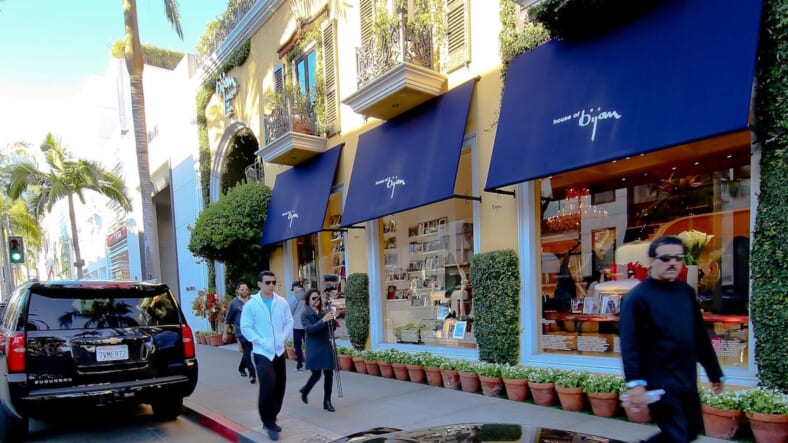 Nicolas Bijan Pakzad was just 19 years old when he took the reins at House of Bijan, the exclusive menswear brand.

Founded by his late father, Bijan Pakzad, in 1976, the boutique is famed for its yellow Italianate facade, collaborations with Bugatti, and by-appointment-only policy.

Its formidable clientele—among them, U.S. presidents George H. W. Bush, George W. Bush, and Bill Clinton, the kings of Spain and Saudi Arabia, and a cadre of international billionaires—has only solidified its renown as a truly global iconic brand, and added to its mystique as “the most expensive store in the world.”

Bijan’s namesake and founder often served as the face of his empire, smiling in campaigns alongside Michael Jordan and actress Bo Derek.

“He really loved what he did, and he was very excited to show his pieces to the most powerful men and women all around the world,” Nicolas tells Maxim. “When you have a certain level of respect for your products, it’s contagious.”

Bijan was among the world’s most famous designers for nearly four decades, dressing the world’s power players in impeccably tailored suits and in his signature Bijan colors.

After his sudden passing in 2011, it was clear who would carry the brand forward. Bijan had groomed his only son, a face already known to his loyal clientele, as his successor, and loyal customers knew they would continue to be in good hands.

Now at the helm, Nicolas is committed to preserving what his father built, refusing to compromise it for passing fads. “We are very much a classic, timeless brand,” he says. “It’s much better to be classic and timeless than fashionable and hot, because we have been more profitable, year after year, for the past 42 years.”

Nicolas has made several moves to capture new customers, many of them young millionaires from mainland China. He has introduced casual items such as linen and silk blouson jackets; he named middleweight champion Gennady Golovkin (“GGG”) his newest ambassador; and in May he opened a boutique in Las Vegas, the only Bijan shop outside Beverly Hills.

The 27-year-old menswear prodigy spoke with Maxim about the unparalleled experience of shopping at Bijan and his vision for its future.

Who shops at Bijan?

They’re the smartest, most shrewd businesspeople in the world, and in some instances they’re spending millions of dollars.

What makes them return?

When people pay a certain price for something, they expect to receive a certain level of service. When somebody walks into Bijan, he is usually the only person in the boutique. There aren’t several customers looking at things and trying them on. The whole boutique is really working for that person. That’s why we go by appointment.

We are also making our clothing in a way that nobody else does. A Bijan tie is made of pure silk, all by hand, in Italy. Then we’ll take the box, which is usually something that you would throw away, and we’ll wrap it in the same silk as the tie. And then maybe we’ll take it a step further, and we’ll use the same silk to make a ribbon in the box that will hold the tie. Now you’ll see that this piece you thought was just a normal tie is actually a piece of art.

Bijan has dressed presidents and royalty. What is a memorable experience of meeting one of them?

When I was a teenager working with my father during the summer and on weekends, every day something unbelievable happened. One day President Bush Sr. stopped by the boutique unannounced. He walked into the store and said, “I’m here to see Bijan!”

He came in, took a tour of the store, and tried on some pieces. Very rarely did I ever see my father on edge, but it was a very big deal for him. He was an immigrant who came to this country from Iran in the early seventies, and now here he was dressing the former president of the United States.

When did boxing’s middleweight champion of the world, Gennady Golovkin [“GGG”], become your newest brand ambassador?

The late, great Muhammad Ali was a big fan of our company. Toward the end of his life, he was living in Scottsdale, Arizona, and I would visit him every year. One year I went there, and I had the pleasure of meeting Gennady. I noticed he didn’t look like a fighter. He was very humble and gracious; he looked like a diplomat.

A few weeks later, I was invited to attend a fight of his in Monaco and I saw a different man. He had this incredible fight in the most beautiful setting. Prince Albert and our entire client base were watching him fight and rooting him on. We hit it off, and we got to become close friends.

Ever since, he’s been wearing our patch in all of his fights and our clothes to press conferences. We are very honored to have an ambassador like him because he is a Bijan client personified: He’s young, he’s good-looking, he’s humble, he’s smart, he’s a businessman, and he’s the best at what he does in the world.

Bijan has designed for Rolls-Royce and Bugatti. How will you continue this tradition?

We are in the very early stages of launching a collaboration with Aston Martin to do a Bijan limited-edition DBS Superleggera. We hope to have the first one delivered to Rodeo Drive, for the public and tourists to take pictures with, in January 2019. We think we are going to incorporate some of the detailing in alligator, like we do with our jackets and leather goods. Of course, we’ll do some personalization for clients with their initials and maybe their family crest. We call our clothing “wearable art,” and that’s something we call “drivable art.”

What are your plans for growth?

I want Bijan to be even more of a well-known name than it is now. A lot of our potential clients are not able to shop with us because we are only in Beverly Hills. In the next 10 or 15 years, it would be great to have a store presence internationally, but we have to be careful. We have a brand that has an extremely high amount of goodwill, and it’s very easy to damage that.

Las Vegas provides a very strategic advantage, being only 45 minutes away by plane from Beverly Hills. Our top-level executives and I are able to travel between the two boutiques very regularly. That is a big advantage for making sure we scale in the correct way and that the experience, quality, and attention to detail are not compromised. We’re very happy to have Las Vegas, but I think next on the agenda would probably be New York City or London.

Lastly, what is the most important lesson you learned from your father?

I must have been 19 years old, and he told me, “Imagine what you could be. I started with very little, and I am where I am today. Look at where you’re starting and where you could be.”