Bulgari Indulges Its Dark Side With New Watch Line 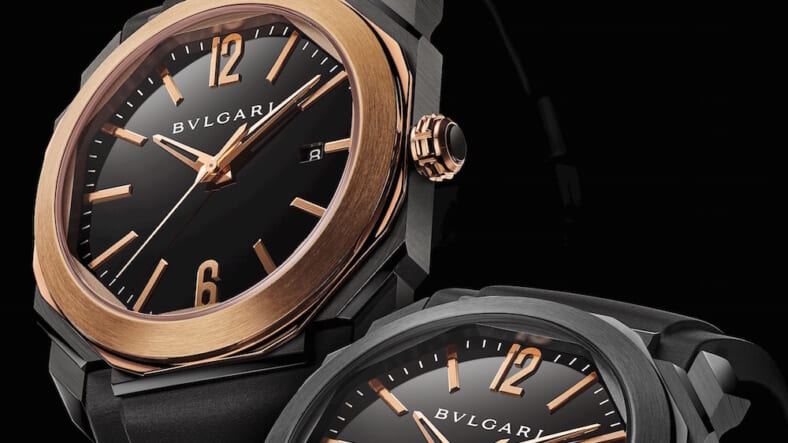 Bulgari made a serious splash on the luxury watch scene in 2012 when it debuted its OCTO line to high praise. Now, the Italian luxury brand is venturing into darker and moodier territory with its new collection of OCTO Ultranero (“Ultra-Black”) watches, which look as sinister as they are beautiful.

OCTO Ultranero Finissimo Tourbillon ($115,000)If you’re searching for a superbly sleek dress watch, look no further than this razor-thin beauty (1.95 mm thick). It works off the world’s slimmest flying tourbillon movement, and its black casing has been treated with Côtes de Genève finishing. And that black alligator strap gives it an added animalistic edge.

OCTO Ultranero Solotempo ($8,600 in black; $11,400 in rose gold)The Solotempo gives you some style leeway, as it’s available in either a black or rose-gold bezel. This one operates with automatic winding and has a black rubber strap, although it’s got the same Côtes de Genève finishing.

OCTO Ultranero Velocissimo ($14,000)Here’s the souped-up big brother of the bunch. It’s a high-frequency chronograph with similar style touches, like the black dial and luxurious finishing. However, it’s only available in a pink-gold bezel, and is the priciest choice.

Black was a smart move, as all-black watches are currently having a moment in the men’s market. However, those rich touches of gold ensure these decidedly sporty wristwatches won’t clash with a bespoke suit, either.

Guido Terreni, Managing Director of the Bulgari Watch Division, said in a statement, “Beauty is as important as strength, so it allows itself a touch of gold, because gold is the signature of luxury according to Bulgari.”

Sounds about right to us. These black beauties will be out in April, when you can pick them up at Bulgari boutiques.