With Caron Core Guard structure and Bluetooth connectivity, this watch can do it all. 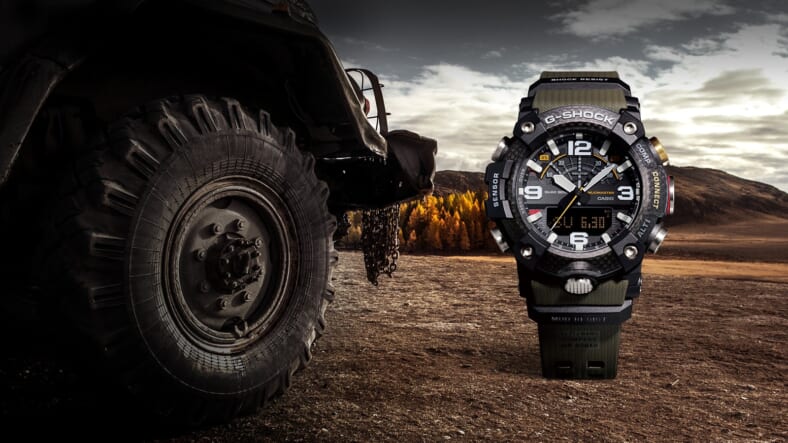 G-Shock continues with the new Mudmaster GG-B100 to make inroads into owning that subset of the watch-buying market where customers want a high-end timepiece that can play just as hard as they do.

This next generation Mudmaster brings that sweet mix of practical and “smart” features that has become a G-Shock signature. It comes with protective Carbon Core Guard tech, which reduces weight and boosts durability by encasing the watchworks in carbon fiber.

It also has built-in low powered Bluetooth, one of the smartest G-Shock features around. With the ability to connect to a smart phone, you can quickly sync your watch’s time with atomic-level accuracy anywhere in the world.

But this model is called “Mudmaster” for a reason — it’s built to handle mud and dirt and water, all while bearing other, more delicate features like a compass, temperature sensor, and accelerometer for tracking steps.

That’s in addition to G-Shock’s standard-issue complications such as a chronograph, alarms, world timer, and LED light with afterglow.

If you’re in Japan, you’re in luck: The new Mudmaster is available there. Look for it online and at select US retailers in August 2019. Prices for the US aren’t set yet, but Mudmasters can run up to $750.