Converse also dropped a militaristic blacked-out take on the iconic ERX high-top. Which is your fave? 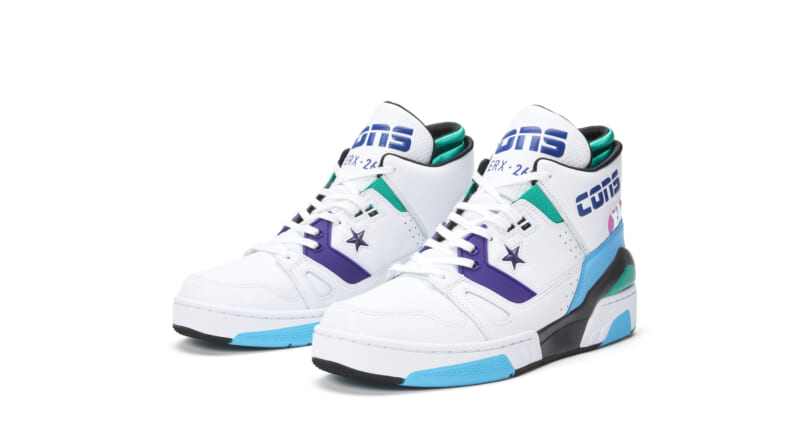 The Converse ERX once epitomized the over the-top basketball style of the late 1980s. Now the classic silhouette has been resurrected to embody the boldness of today’s hoops culture.

As he did with his first sneaker collaboration dropped last fall, streetwear designer Don C continues to explore the ERX’s legacy with the strikingly old-school ERX 260 Jewel.

With bold gradient color schemes, jewel-tone flashes and iridescent details, the latest take on the ERX harkens back to the boastfulness of team rivalries that defined the ’80s.

Meanwhile, Takahiro Miyashita of the TheSoloist has designed a more modern, tactical take on the ERX in a murdered-out colorway.

As Converse says, “it leverages the silhouette to explore American society through three convergent subcultures – rock music and basketball.”

The designer emphasized the on-off wearability through its rugged zipper application and moto-inspired aesthetic.

Both ERX kicks will be available in limited quantities beginning February 16 during NBA All-Star weekend in Charlotte, N.C.

Converse x TheSoloist will be on sale exclusively at Social Status for $150, while Converse x Don C Jewel will be available on SNKRS, House of Hoops and MINT for $110.