Made it Detroit with a Swiss movement. 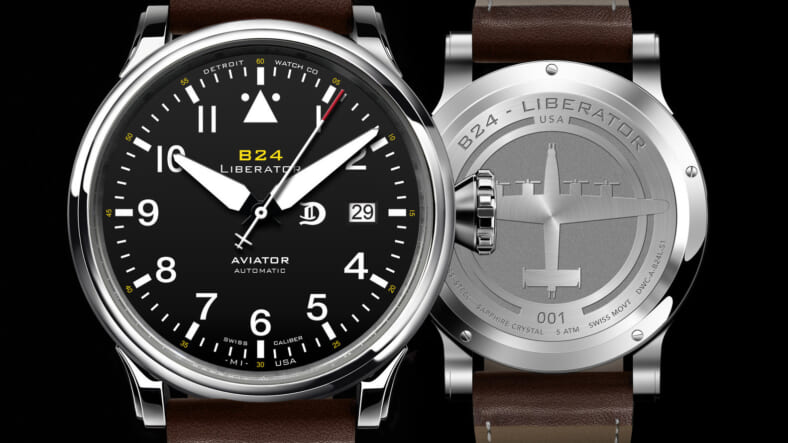 The Detroit Watch Company, which bills itself as Detroit’s first and only watchmaker to offer Swiss automatic timepieces, has come out with a new model honoring Detroit-built World War II bombers.

The B-24 Liberator takes its name from the aircraft that played a decisive part in the war. The heavy bomber served in every branch of the American armed forces, as well as several Allied air forces and navies, and was used in every theater of operations.

It was not only an important weapon in America’s “Arsenal of Democracy,” as President Franklin Roosevelt called it, but an important part of Detroit’s industrial economy and its contribution to the war effort. The B-24 Liberator watch comes in two sizes – a 44mm chronograph model retailing for $1,850 (below) and a more simplified 39mm version (top photo) which sells for $1,100.

With classic pilot’s watch good looks, the 44mm is the one to get, featuring a water-resistant stainless steel case, Swiss automatic chronograph movement, 48-hour power reserve, sapphire crystal, and calfskin leather band with deployant clasp. The caseback is engraved a with a top view of the B-24 bomber and the series number of the limited edition piece.

Detroit is getting cooler by the minute.