We started it. We’re sorry. 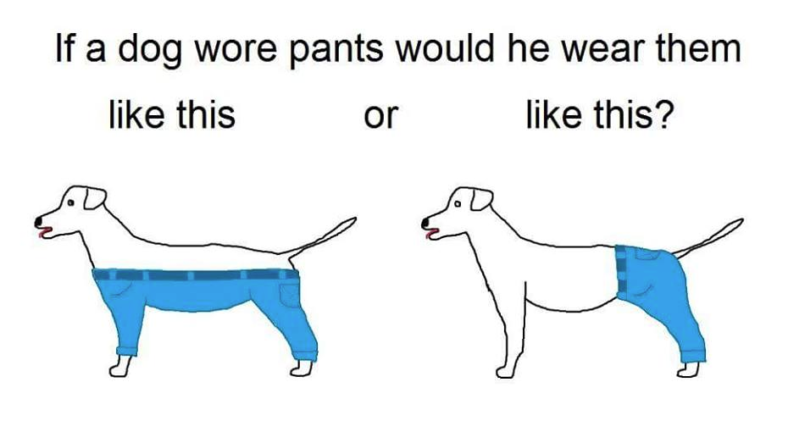 On Monday night, I shared a photo on Twitter of two dogs wearing pants. This doesn’t sound like that exciting an event, but the internet quickly lost its damned mind.

Let me back up. I’m not the original creator of this image. It was shared on my Facebook News Feed by a high school friend from a page called Doggo fight, which shared it from a page called Utopian Raspberry – Modern Oasis Machine (read: UR-MOM). When reached by Maxim, a page admin named Norbert claimed that he created the original image after spotting a dog wearing pants in his neighborhood.

“I created it last night at about 2 or 3 am (it’s 4:30 pm now my time),” Norbert told Maxim over Facebook Messenger. “I saw some dogs wearing pants, and I thought about how they don’t really have arms so their pants should technically go on every leg. I just tried both versions.”

“I honestly didn’t expect it to become so popular,” he added. “I’m just glad people found it entertaining.”

Anyway, I shared this photo on Twitter and it exploded to more than 11,000 retweets in two hours. As of Tuesday morning, my Twitter mentions are a war zone, and desktop Twitter clients like Tweetdeck are crashing while trying to keep up with notifications.

Naturally, the internet is losing its shit debating how a dog should properly wear pants. Our friends over at Uproxx went as far to dub this debate the cousin of “The Dress,” the viral blue-and-black (or white-and-gold?) cocktail dress that went viral earlier this year and even earned analysis by the New York Times.

So what’s the answer? I ran a Twitter poll and the majority of respondents seem to agree that the dog on the right has the right idea.

In the meantime, all of Twitter is furiously debating the right answer.

Where does Norbert stand? “Personally, I think the second one looks better,” he told Maxim.