Platinum, gold and rhodium-plated brass take this opulent timepiece totally over the top. 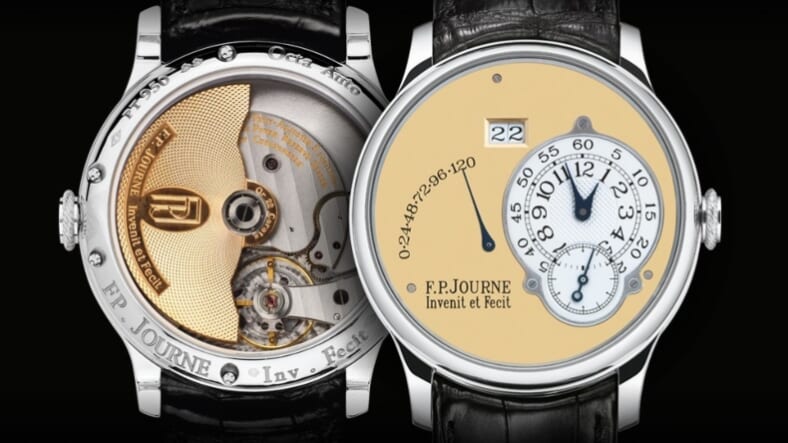 The Automatique harks back to the 2001 launch model, with a platinum 40mm case and satin-finished dial in yellow gold. The power reserve (160 hours) indicator sits in a lower position to make room for an enlarged, more legible date window.

Power comes courtesy of F.P. Journe’s monodirectional-winding caliber 1300.3 in rhodium-plated brass with a 22K gold rotor. A key aesthetic difference between previous Octas is that the movement is visible via the caseback’s openwork bridges.

Blued hands, polished rounded pegs and ends, and numerous engravings including “Octa Auto” and a serialization add other ultra-luxe elements.

“Once the challenge of [engineering the caliber] was successfully met, I knuckled down to the second challenge of managing to insert complications into that same movement: power reserve with large date display, fly-back chronograph, retrograde annual calendar, etc., and doing so while maintaining an identical size for all models.”

He added that three years went into research and development before the caliber was presented publicly in any model.

Limited to 99 examples, the special-edition F.P. Journe Octa Automatique is priced at $62,300.