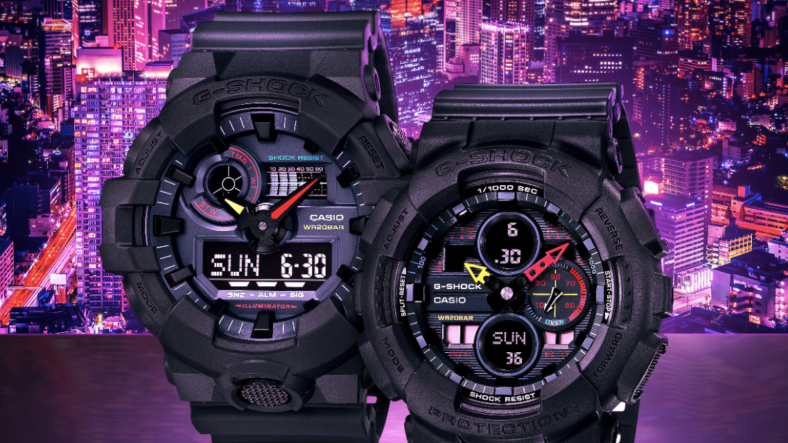 Casio isn’t afraid of nostalgia. It has inspired some of the most novel entries in their G-Shock line, and the new models announced this week by the Japanese watchmaker are no exception.

The “Neo Tokyo” series looks back to a 1980s-era vision of the future as found in epic Japanese Anime/Manga films like the 1988 epic Akira. There are four watches, each bearing blacked-out bezels and hands in red, blue, and yellow—colors intended to evoke city lights at night.

Of course the G-Shock DNA blends digital and analog, so Neo Tokyo watches function as stylish updates to the DW6900, GA140, GA700, and GAS100 model lines.

Here are some ways the Neo Tokyo line differs from the base models:

The video embedded above gives further details on the features found in the Neo Tokyos. Of course, they also have complications (additional functions) found in most G-Shocks, such as shock resistance, 200M water resistance, a stopwatch, countdown timer, and multiple time formats.

The Neo Tokyo line goes on sale in September 2019 at G-shock retailers and online at gshock.com.