A tough timepiece that’s been engineered to handle anything. 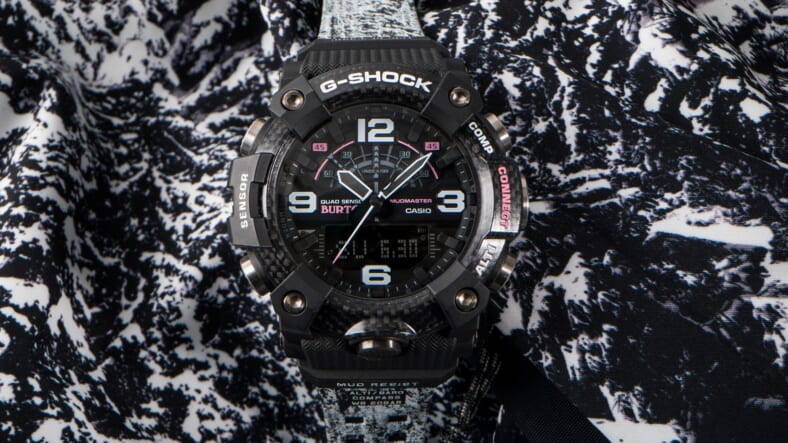 Casio G-Shock revealed today that the brand is partnering with the premier snowboard brand, Burton, for a limited-edition release of a new Mudmaster watch.

The GGB100BTN-1A has been–like all G-Shocks–made to handle whatever gets thrown its way. It pairs perfectly with the kinds of hardcore conditions snowboarders encounter daily in wintry mountain environments.

G-Shock took plenty of design inspiration from nature to create this one-of-a-kind Mudmaster. Its band, for example, is winter camouflage reminiscent of snow-covered trees in the forests of British Columbia–vistas captured by noted snowboard photographer Dean Blotto Gray.

The GGB100BTN-1A has been custom packaged in a case that matches the watch band’s evocative pattern and it arrives bearing G-Shock and Burton logos.

In a press release, Dean Blotto Gray called it a great “honor to collaborate with G-Shock and Burton,” which he says are “two amazing brands doing great things for outdoor enthusiasts.”

Under the face, this is a classic Mudmaster. It has the line’s Carbon Core Guard Structure and dirt and mud-resistant carbon-insert bezel. Large, slip-resistant buttons ensure easy operation even when wearing gloves.

G-Shock features fans of the line have come to expect include:

The GGB100BTN-1A will be available at G-SHOCK Soho and Burton flagship stores, gshock.com, Burton.com, Macy’s, and select fashion boutiques and jewelers for purchase starting February 21, 2020.

It will retail for $440. Visit gshock.com for more info.