Stay on time and in sync wherever you go. 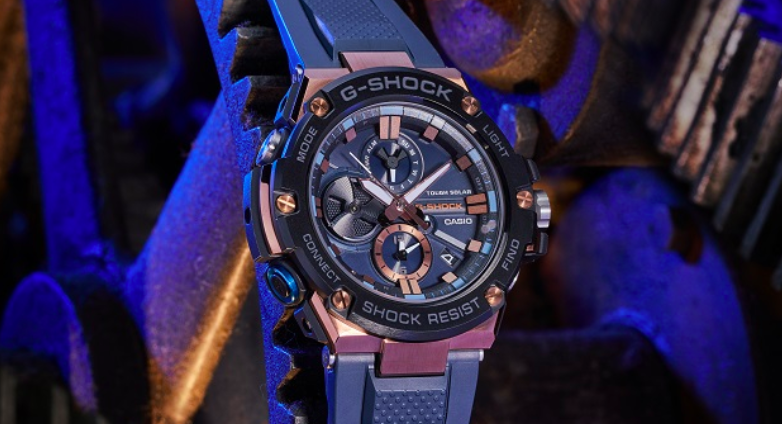 G-Shock just keeps beefing up its impressive G-Steel collection. With model no. GST-B100G-2A they’ve managed once again to blend the line’s rep for ruggedness and durability with rose gold-trimmed, almost formal elegance.

With striking blue accents on the dial and the pusher that activates its low-power Bluetooth, it’s a perfect complement to any top-shelf watch collection.

Then there’s one of G-Shock’s most clever innovations ever, the Bluetooth function. It hits such a great sweet spot for watch lovers who appreciate the functionality of smartwatches but want something they don’t have to worry about plugging in to charge at the end of the day.

In fact, you may not have to worry about power for years with this G-Shock: It has “Tough Solar” technology to enhance its usefulness and longevity.

And that’s in addition to other expected functions like date display and day indicator.

At the moment the GST-B100G-2A with rose gold trim and blue accents is sold out online. You can find retail outlets that may still have inventory here.

If you’re looking for timepieces with similar functions, the entire G-Steel line can be found here. It ranges in price from $224 up to $700.