Because let’s be honest, transition lenses are kind of weird. 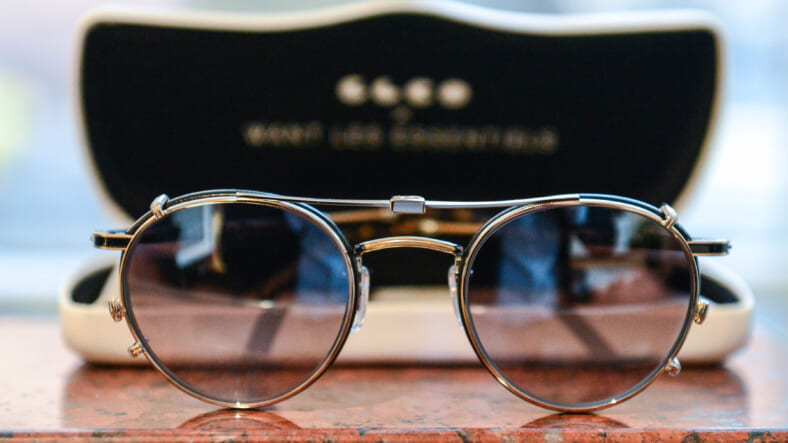 Garrett Leight knows frames. His father, Larry Leight, was a founder of Oliver Peoples and the younger Leight has gone on to build something of an eyewear empire on his own. Now the optical designer has teamed up with the design duo behind Want Les Essentiels for a collaboration.

Having been in the business for a decade, the Canadian twin brothers behind Want Les Essentiels know their way around leather accessories. Their minimal — and more importantly functional — totes, wallets and portfolios have found fans from the likes of Bergdorf’s, Opening Ceremony and more, spurring the pair to delve into footwear two years ago. Now they’ve added frames.

“You know, we had never done leather on a frame before,” Leight said last night at the official launch of the brands’ collaborative style which features Want’s take on GLCO’s Wilson frame. “It’s something that we were talking about before we had decided  to collaborate with them so it was really serendipitous because they make some of the best leather products in the world.” Byron Peart of Want echoed Leight’s sentiment admitting that he and his brother personally wore Leight’s frames prior to working with the brand.

“We started talking about this about a year ago but about six months ago the Wilson style really took off,” Leight explained. “Kendall Jenner and Emily Ratajkowski bought them in our stores and started wearing them everywhere. Now we can’t keep them in stock — we’re actually out of stock with them right now, right when the Wilson leather version is about to come out.”

The frame is one of the first non acetate styles to join the brand’s permanent lineup. For the Want collaboration, they come complete with clip-on foldable lenses for a quick and effortless transition to night as well as a leather case. That easy, fuss-free transition was key to the Peart brothers, according to Byron.

Pick up the collaboration now with the optical rim available in brown and black. The sun clip is optional.