It’s a luxe timepiece truly worthy of the King of All Monsters. 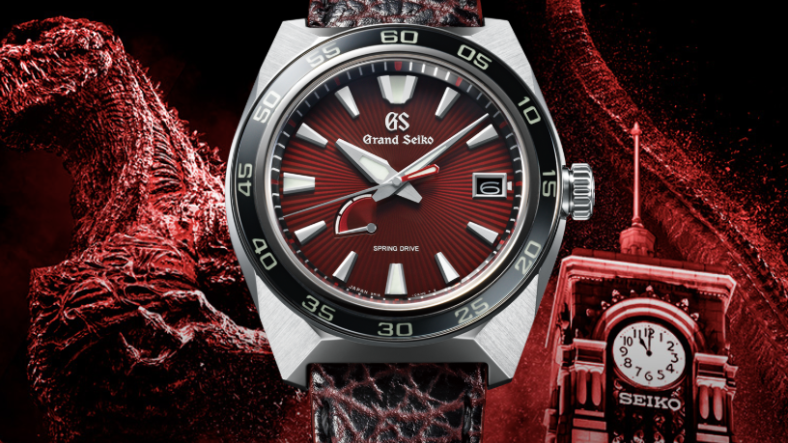 Godzilla was developed by Japanese filmmakers in the 1950s as an allegory (in part) for the threat of nuclear weapons. The Spring Drive is novel timekeeping tech developed by Japanese watchmaking giant Seiko in which watch mechanics are augmented by electronics for uncommon accuracy. This year they both have landmark anniversaries: The Spring Drive turns 20, and the King of Monsters is 65.

Grand Seiko is celebrating both with the commemorative limited edition Grand Seiko SBGA405, an edgy, spring-driven luxury watch with a bold design that reflects its association with the fearsome fictional monster.

What do the SBGA405 and Godzilla really have in common besides anniversaries? According to Grand Seiko (Seiko’s luxury line of watches), more than you’d think.

Godzilla first stomped into Japanese movie theaters in 1954, and in that movie, the monster rampages through Ginza—Seiko’s birthplace—and obliterates the Seiko clock tower atop the Wako store, where the watchmaker first opened a retail outlet in 1952.

The Grand Seiko SGBA405 design was inspired by Godzilla in subtle ways. The watch has a red dial and black rays reminiscent of Godzilla’s back crackling with fire under the surface before it bellows heat from its mouth.

A black-coated shark strap underscored by red accents suggests the monster’s hide, and the watch’s sharp-edged design, in general, is meant to smack of Godzilla’s romping, stomping, fire-breathing legacy.

Of course, it’s just a novelty timepiece without specs worthy of the name Grand Seiko. It certainly has them: