The 1970s-era timepiece was worn by everyone from Jack Nicholson to Keith Richards. 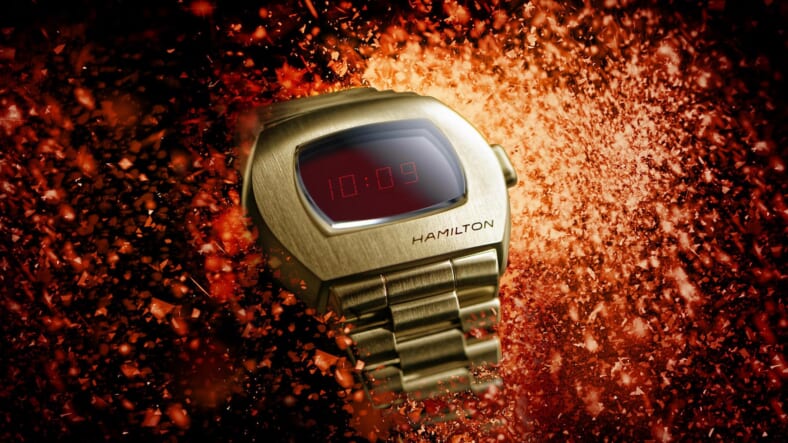 The new Hamilton PSR still exudes a decidedly space-age aesthetic (at least as envisioned in the early 1970s), and comes in two versions: regular stainless steel and stainless steel coated with yellow gold PVD that’s limited to 1,970 models, a nod to the year the original Pulsar was launched.

Both watches feature a digital quartz movement, a 40.8mm case, a sapphire crystal face with anti-reflective coating, and are water resistant up to 100 meters deep.

The Hamilton PSR also boasts a hybrid display that combines reflective LCD and emissive OLED tech. Pressing a button lights up red OLED numerals, while the LCD display ensures that time is always visible in daylight.

The original Pulsar made horological history as the world’s first digital wristwatch when it was unveiled at a press conference on May 6, 1970 at The Four Seasons restaurant in New York City. The groundbreaking electronic timepiece featured no moving parts and no ticking sound, and was such an oddity at the time that it was even featured on The Tonight Show with Johnny Carson.

The Hamilton Pulsar P1 first went on sale in 1972 with a cushioned case and 18K yellow gold bracelet that sold for a then-staggering $2,100. Elvis Presley was among the first wealthy VIPs who snapped up one of 400 limited-edition models.

In 1973, the Pulsar was available in wider release as the stainless steel Pulsar P2, with a more rounded case design and an improved chip module, and soon became a coveted item among savvy watch collectors and future-fascinated celebrities alike.

The stainless steel version of the new Hamilton PSR is available for $745, while the limited edition yellow gold PVD-coated version goes for $995 while supplies last.