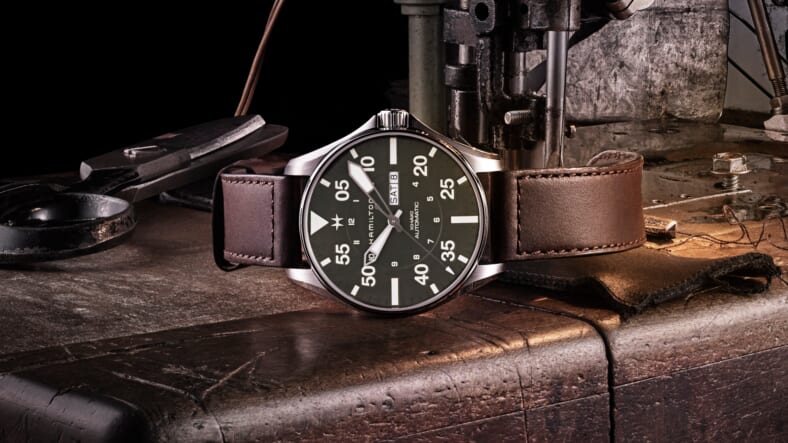 Hamilton watches are straight-up American classics. The company was founded in Pennsylvania and had such an immaculate rep for excellent timekeeping it was once the railroad’s—and later the U.S. military‘s—watchmaker of choice.

It’s only natural then that Hamilton has teamed with leather-loving outfitters Schott NYC, known for classic biker jackets as well as military outerwear, to create a true collector’s item, the Khaki Pilot Schott NYC.

The Khaki Pilot is a substantial timepiece with a 46 mm case and precise H-30 automatic day-date movement and a whopping 80 hours of power reserve. In keeping with the Hamilton-Schott shared history of military use, it has a khaki green dial that offsets pale green Super-LumiNova® numbers and hands.

The Khaki Pilot, after all, is made with flying in mind and pilots require watches with maximum readability.

While for some the band might be an afterthought, Schott NYC is a partner in creating the Pilot for a reason. They carefully selected top grain steer hide leather to make the bands, which come in what Hamilton says is the “Federal Standard military color 30099 Earth Brown.”