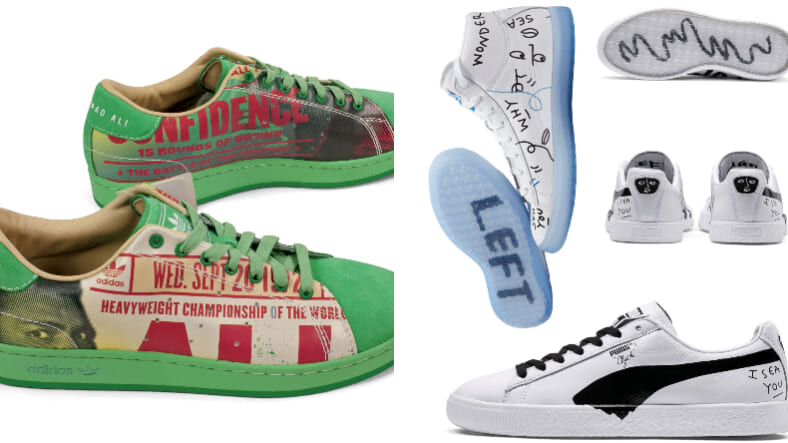 In sneakers, as I am sure is the case in most areas of pop culture, the word collaboration (or collab) carries a broad set of expectations. For the sneaker historian, the curator of the culture, in a sense, the word implies that a story must be told. But not just any tale will do. The story must connect to the product and the collaborator in a way that is undeniable and meaningful. Looking across the spectrum of sneaker culture, you also have the profiteer and the opportunist. For them, too, the word collaboration needs to tell a story, one that will allow the quick sale of the sneaker and a meaningful return on an investment.

While each navigates the culture in his or her own way, both play crucial roles in developing and expanding the reach of the story created through collaboration. Step back and look at collaborations in sneaker culture, and a large swath of colors, styles, and finishing touches is revealed. Some collaborations are as simple as attaching a name. Others are as complicated as redefining a silhouette and changing the way the intended use and perception of the sneaker are communicated. Neither is right or wrong. They are simply different ways of tapping into the extraordinary power that sneakers have come to wield in the world of finance and the psychology of the self.

With Sneakers x Culture: Collab, Elizabeth Semmelhack dives deep in the sneaker world to not only provide an origin story for this niche market of collaboration, but also to take us on a journey that veers from marketing, to refinement, to destruction, to profit. This book takes into account the culture of sneakers and how its dynamics have changed over the last ninety years, as well as the political implications inherent to the communities where sneakers are often marketed. Finally, this journey explores the most complicated aspect of the creative process—the art.

We now live in a world where a collaborator can add a new shade of red, or deconstruct a classic design, and create a frenzy that shuts down stores and cripples servers. Explored through the eyes of the doers, the makers, the consumers, and the watchers, this look at sneakers through the lens of the collaboration brings us closer to understanding America’s fascination with what was once just rubber, canvas, and glue. It’s a look at the rise of sneaker culture, which is now out of the box and in the hands of the artists, designers, entertainers, and athletes who are often the emotional and moral conduits through which we tell our stories.—Jacques Slade

In 1996 Reebok took a chance and signed the phenomenally talented but controversial and defiant rookie NBA player Allen Iverson to a ten-year sneaker deal. Iverson launched his professional career as a Philadelphia 76er wearing his signature shoe, the Question, a sartorial reply to his nickname, “The Answer.” Subsequent Iverson sneakers were called Answers. For many, the Answer IV is one of the highlights of the series.

Worn by Iverson in
the 2000–2001 season, it was also the most personal design up to that date. Iverson closely collaborated on its sleek styling, which included a shrouded upper with a zippered closure and a portrait of himself on the sole. Iverson wore the black-and-white Answer IV on May 9, 2001, during the Eastern Conference finals, when he scored an incredible fifty-four points. He wore the sneakers again to the NBA finals on June 6, 2001, when he scored forty-eight points for the 76ers in game one, helping them defeat the Los Angeles Lakers. The Answer IVs were also on his feet when he was named the All-Star Game MVP and the league’s MVP in 2001.

“Adidas gave me the opportunity to collaborate and honor a true American hero. Muhammad Ali is a symbol of strength, courage, and fighting through obstacles. I selected the image and colors in my painting to represent growth and new beginnings. Inspired by his life lessons, I’ve strived to use my art to motivate positive change in my community.”
—Cey Adams

The monochromatic Yeezy 500 Desert Rat Blush is a study in silhouette and texture. The design features sophisticated patterning with cutaways and appliqués that highlight the various textures of the
materials used, which include tumbled leather, smooth leather, suede, and mesh. The 500 marked West’s engagement with the “ugly sneaker” trend and caused a stir when it was first released.

British artist Dave White began making paintings of sneakers around 2002 after he was struck by the form of a pair of Air Max 95s. He was inspired by the architecture of sneakers and wanted to immortalize them while simultaneously expressing their essential ephemerality— meaning that sneakers are designed to be worn until they are completely worn out. His resulting paintings seem to pin the sneakers in time and space. He even mixed the paint that he used to depict the midsole of the sneaker with elements that would yellow over time, causing the artwork to age like the soles of sneakers themselves.

Artist Shantell Martin’s work wends its way across mediums, questions boundaries, and draws viewers into larger discussions. Indeed, for Martin, art is a conversation that can sometimes best be expressed through collaboration.

Vetements was established in 2014 as a design collective by designer Demna Gvasalia, with his brother. Shrouded in secrecy, the collective has been provocative from the start. Its brazen co-optation
and unexpected collaborations have merged skateboard streetwear aesthetic with high fashion and toyed with themes ranging from fashion-as-uniform to the expression of social realism to irony and
late-stage capitalism. Collaboration is at the core of the company; its 2017 Spring/Summer collection featured collabs with eighteen longstanding brands.

The Vetements aesthetic is clearly visible in the brand’s work with Reebok, which began in 2016. The Genetically Modified Pump was a Frankenstein-esque combination of sixteen archive models that suggested the work of a mad scientist. The sneaker does seem twisted. The pump is shifted off-center to the lateral back quarter, and the complicated and asymmetric lacing gives the upper a feeling
of being violently lashed down.

Its predistressed scuffs and scrapes suggest some kind of struggle during its manufacture rather than regular post-purchase wear. The shoe’s rough, dirty appearance also
alludes to the contrast between how sneakers are worn in skateboard culture and how they are worn in urban sneaker culture. The bulky size of the Genetically Modified Pump was in line with the brand’s
habitually oversized silhouettes, but also presaged the “ugly sneaker” trend that would dominate fashion the following year.

In 2018 Reebok and Kerby Jean-Raymond, founder of the fashion house Pyer Moss, took home the Footwear News Collaboration of the Year Award. In less than a year, their collaboration resulted in a
number of important sneakers. Reebok reached out to Jean-Raymond because of his commitment to revealing untold stories and moving culture toward greater inclusiveness through his clothing designs.
Jean-Raymond was drawn to Reebok because the company enabled him to mix politics and design seamlessly through sneakers that push the envelope of design.

Les Benjamins is a Turkish streetwear brand established by Bunyamin Aydin in 2011. Aydin was interested in streetwear beyond New York and Paris; he was inspired by the rich history and new potential evolving in other cities around the world. In 2019 he did his first collabs with Puma, which included the Puma RS-0 high and low, as well as the Puma Thunder. Aydin was born in Germany, raised in Switzerland, and currently lives in Istanbul. He has long been interested in confronting the East-West divide and has sought to address this through fashion.

Sneakers x Culture: Collab is available for $45 from Rizzoli.