In Defense of Flip-Flops

A little bit of delicious informality goes a long way. 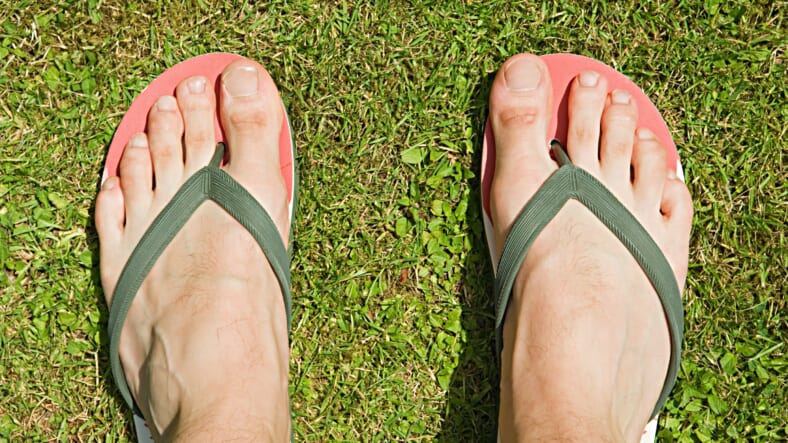 It’s that time of year again; the mercury rises, and we seek chilled refuge. There are few choices: movie theaters are expensive, bookshops don’t exist, and grocery stores do not stimulate the temporal lobe. The best course of action, really, is to air out your feet. In the warmer months, they—or at least mine—tend to perspire like James Brown after an extra set.

This, I realize, is catnip for the traditionalist crowd, who suffer under the antiquated belief that feet ought to be encumbered by a heel strap. Well, come at me, haters.

I am not catholic about it; I won’t wear something cheap. I refuse to buy an inexpensive, shoddily made pair I’ll have to replace in six weeks. I wear only Rainbows, and have done so pretty regularly for years, in all manner of weather.

Rainbows are not a cure-all. They do not make my feet look good—and how could they? I’m very pale. There is hair on my toe joints (not a lot, but enough to notice); I deploy a clipper sporadically, when there’s a risk of the nail curling in on, and piercing, the skin; and the pedicure I had a year ago was my first and, apparently, my last.

My love for flip-flops isn’t complicated. I just like the feeling of walking on leather. There’s nearly an inch it, of various shades of brown, under the arch, and just over a centimeter under the heel. My foot is kept in place by a tightly stitched woven leather strap. The Bentley model, which I wear until a quarter-sized hole appears in the heel, costs $70. But I can vouch for the $51 pair, which is perfectly snug.

Forgoing more socially acceptable footwear has not been without cost. I do get criticized. But, so far, the jibes are limited to reporters on Twitter (perhaps the footwear police are afraid to say something to my face, because, hey, if I’m willing to wear flip-flips during a polar vortex, who knows what I’m capable of?). They’re quick to remind me of the unsanitariness of the subway and New York sidewalks generally. They say I’m at risk for illness. They say, more often than not, I’m just plain gross. (The Awl, which published my work for years, described me as “wrong and dangerous.”)

I get it. In fact, I’m willing to concede the critics’ points — wearing flip-flops is unhealthy, unattractive, and disgusting. But I don’t smoke, drink very little (not for moral reasons; I have sleep apnea), and gamble even less. Everyone needs a vice, you know?

Anyway, I’m impervious to the abuse. Wearing flip-flops makes me happy. It’s a way of duping the body; for that split second, before one’s feet can absorb the cold or rain, it may as well be summer. Until Peyton Farquhar’s neck snapped, there was a chance to embrace his wife.

Not long ago, my wife and I attended a baby shower. That Saturday was a tad chilly but gorgeous. We were blessed with the sort of sun that Saul Bellow once described as “the light of warmer seasons, not of deep winter.” I wore dress pants, a button-down shirt, and a sweater. On a beautiful day, such clothing would ordinarily be constraining. But I wore flip-flops. Even that little bit of freedom — to feel the newly-cut grass in my toes as we enjoyed samosas — was enough to infuse the afternoon with a delicious informality.