Blast off with an absurdly over-the-top luxury timepiece. 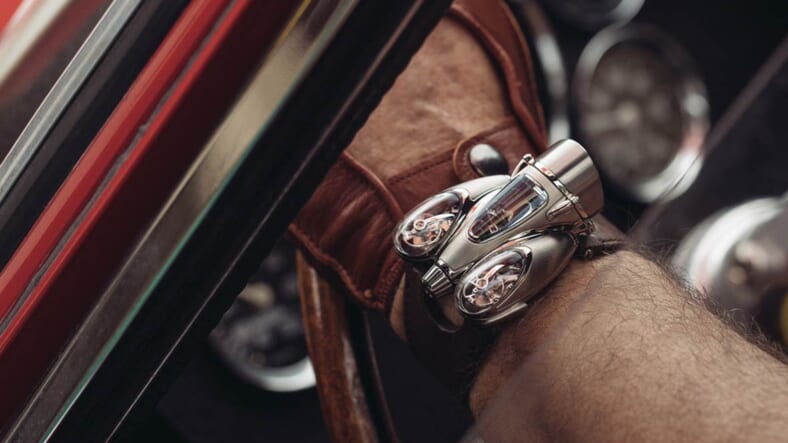 When Maximilian Büsser, founder of cult avant-garde watch brand MB&F, first presented his design for the Horological Machine No.9, AKA HM9 Flow, his manufacturer simply said “no way.” But Büsser has never been one to bow to convention, often referring to his own creations as “crazy.”

Described as a “geometrically complex” combination of milled sapphire crystal and grade 5 titanium, the HM9 costs $182,000 and is limited to just 33 examples each of two different versions: an “Air” edition with a dark movement and aviator-style dial, and a “Road” edition with a rose gold-plated movement and speedometer-style dial. The movements are of course in-house, i.e. bespoke.

Resembling a jet engine and inspired by futuristic mid-century automotive and aviation design, the HM9 could be dismissed as deliberately provocative and impractical. But Büsser insists that’s (somewhat) wide of the mark.

“If it has already been done, what is the point in doing it again?” he once told me. “The watch industry has been taken over by marketers, who keep on copying whatever they think will sell. It’s a little sad and leads to a dwindling creative spiral.”

Outside the oil-fueled fantasyland of Dubai where he is based, Büsser’s designs, inspired by science fiction and his childhood dreams of space travel, can look a bit absurd. But well-heeled watch collectors have not only kept him solvent but made the business a resounding success.

We still can’t see many people wearing a 57mm mechanical alien that costs nearly as much as a McLaren, but if you ever do spot one of these in the wild you’ll never mistake it for anything else.