They’re dedicated to the art of the hustle. 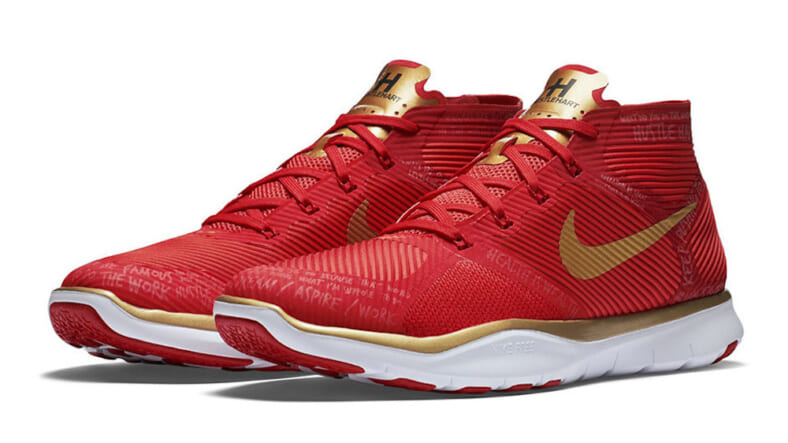 There’s a long and storied history of sports and music celebrities putting out sneakers–Chuck Taylor in the ‘30s, Michael Jordan in the ‘80s, and of course Kanye West and countless other shoe-hawking rappers of today. But Nike is unexpectedly drawing from the comedy world with its latest collaboration with stand-up sensation-turned-movie star Kevin Hart, the first comedian to ever land a shoe deal with the athletic giant.

The coupling may seem odd, but Hart is known to wear many hats (or in this case, shoes). He’s a box-office behemoth despite his films catching flak from critics, a champion of active lifestyles, and a soon-to-be author. So, why shouldn’t he try on the shoe designer role for size?

The kicks—dubbed Nike Hustle Harts—bear the silhouette of the Free Trainer Instinct. They come in a bright red and gold colorway, and their upper is made of a lightweight wrap knit.

Scribbled onto these kicks are motivational mottos like “Health is wealth” and “Don’t stop grinding.” It is an ode to the hustle that would seem to fuel this little man’s big-time career.

The release of these official images comes after months of anticipation. Hart teased the shoe on The Tonight Show With Jimmy Fallon in January and followed up with a string of promotional tweets in April.

The Nike Free Train Instinct has been released and I've been wearing that recently. But my Hustle Hart shoes are due out mid-June

I appreciate your patience & understanding….Trust me my sneakers are well worth the wait. We are about to destroy the summer #HustleHarts

If Kevin is true to his word, they will be out later in June. Time will tell whether the prolific funnyman will stay in the sneaker game for long, but these kicks make for a pretty solid first effort.