Come to the Dark Side With This $150K Death Star Watch

The galactically-priced timepiece is a dream watch for “Star Wars” nerds. 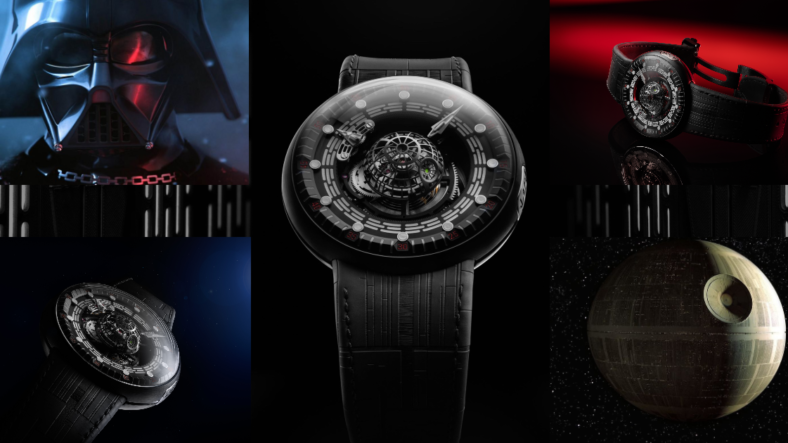 For the Swiss watchmaking industry, 2020 was not a great year. It was actually bad for everyone, obviously, but the hard times that fell on many as the coronavirus pandemic shut down entire industries inevitably put a dent in the luxury goods market in general. One casualty was the offbeat Romain Jerome (RJ) studio, famous for their sophisticated luxury mechanical timepieces often created with superhero tie-ins, like Spider-Man.

Enter Kross Studio, which as of December 2020 was staffed by 9 former RJ employees, according to this interview with Marco Tedeschi, who was a manager with RJ and is now head of Kross. The new design house is already up and running and collaborating with Lucasfilm for the new Star Wars and Death Star-inspired Ultimate Collector Sets. It’s a very 21st-Century combination of high end Swiss watchmaking and devotion to pop culture.

The Death Star Tourbillon is the first timepiece featured above. Kross Studio borrowed badass design details straight out of the Dark Side to put together this collectible, and it comes with a piece of moviemaking history—an official “kyber crystal” that was used to power the Death Star’s deadly beam in Rogue One: A Star Wars Story.

In a release, Kross writes that this “marks the first time that authentic kyber crystal props” have been “released to the public as part of Kross Studio ultimate collector set.”

Kross Studio goes on to say that this presents “an opportunity for die-hard fans to own a piece of the fascinating Star Wars galaxy.”

In the Star Wars universe the crystals are transported in special containers and the watch collection, beginning with the Death Star Tourbillon, comes with a wood and aluminum official reproduction of those containers.

Kross used over 700 parts to hand-assemble and hand-paint the containers alone, and they are half-scale of the original movie props

The container has nine storage compartments and inside those the lucky collector will find: the Death Star Tourbillon watch, three accompanying timepiece straps sets, and the genuine movie prop kyber crystal used Rogue One. The empty storage spaces are meant to provide such well-heeled memorabilia collectors to keep other Star Wars collectibles safe, all secured beneath a removable cover.

The Tourbillon that characterizes the Death Star watch is one of the most complex complications in all of watchmaking. Kross Studio has centered this one to underscore the awe-inspiring fictional inspiration inside a 45 mm black DLC coated titanium case.

The Death Star Tourbillon cage makes one revolution per minute and on closer inspection you can see a green superlaser cannon standing guard.

Other technical innovations include Kross’s own in-house manual-winding mechanical movement which comes with a generous 5-day power reserve. The watch’s hands are attached to an outer display that orbits the tourbillon. The timepiece doesn’t have the usual crown control system—Kross watchmakers replaced that with push-buttons as well as a D-ring shaped crown located on the case back for winding. There is a calfskin leather strap included in addition to two included rubber straps.

Kross went with some subtle but inspired features as well, including a fixed hours wheel coated with blue-white superluminova to emulate the lighting found inside Imperial spacecraft like the Death Star.

Kross is making just 10 numbered Death Star-inspired Collector Sets, that’s it. But they’re just beginning and the company’s release promises “exciting Star Wars-inspired products to come from Kross Studio as they look forward to bringing the most breathtaking and immersive experiences to their fans and customers.”

These striking timepieces are available via Kross Studio and retail for a galactically expensive $150,000, so you may need to use The Force to actually acquire one.