Kurt Cobain’s Seattle Mansion, Guitar And ‘MTV Unplugged’ Cardigan Are All Up For Sale

The Nirvana singer’s multimillion dollar mansion, iconic sweater and “In Utero” Fender guitar are suddenly up for grabs for serious collectors. 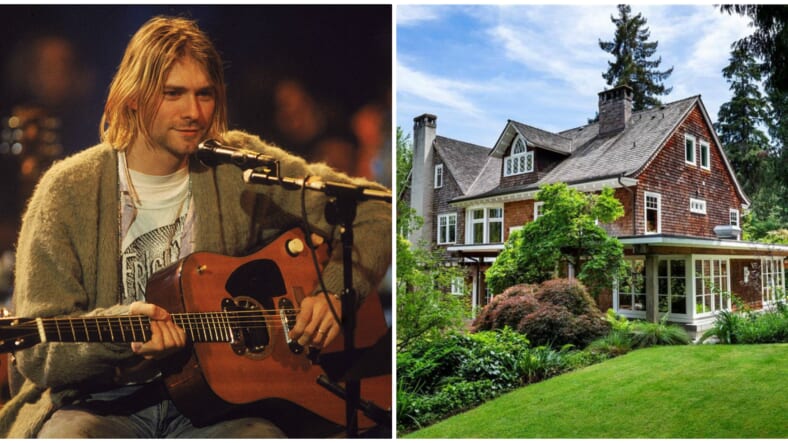 Nirvana frontman Kurt Cobain’s former Seattle home can now be yours–if you’re willing to shell out a whopping $7.5 million for the historic property.

Cobain and wife Courtney Love bought the place for $1,480,000 back in January 1994, but the Nirvana legend later took his own life in the home’s greenhouse just a few months after. But don’t worry, that doomed section of the house has since been torn down.

Love and the couple’s daughter Frances Bean lived there until 1997, after which it was sold to a trust for $2.89 million, according to Curbed. This is the first time since then that the home has been back on the market.

The secluded Queen Anne-style house is located in Seattle’s Denny Blaine neighborhood and was built in 1902.

It has four bedrooms and four baths spread across a comfortable 8,212 square feet, with stone accents, an open floor plan, and millwork.

The windows and balconies all have incredible views of Lake Washington, the Seattle skyline, and the Cascade mountains.

Not much is known about the interior of the home, and there are no images of the inside on the listing from real estate agency Ewing & Clark.

You can learn more about the listing right here.

If buying Kurt Cobain’s $7.5 million house is out of your price range, the iconic olive green cardigan that he wore during Nirvana’s 1993 MTV Unplugged performance will be up for auction on October 25 and 26, and should be a wee bit cheaper.

The auction is part of a two-day rock memorabilia event in New York City with Julien’s Auctions. The event will also see the auction of his custom-made 1993 Fender Mustang guitar that he played during Nirvana’s In Utero tour.