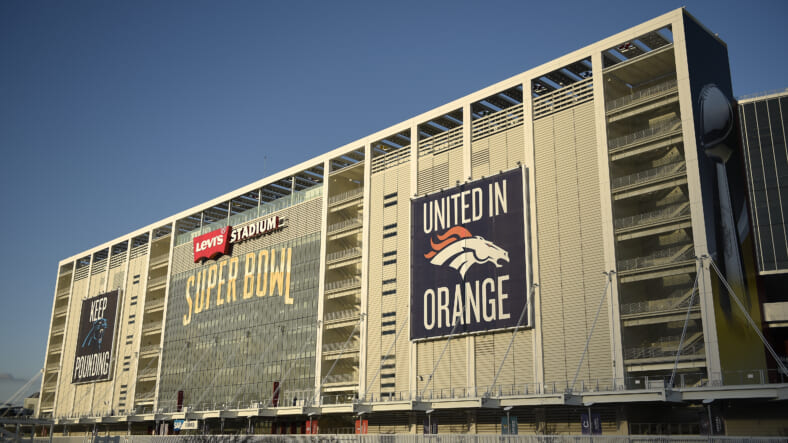 Two All-American brands are deepening their fashion collaboration as the NFL and Levi’s join forces on branded duds for every team in the league, Maxim has learned.

“Last season we launched [a fan apparel collection] with only seven teams,” Adam Zloto, Global Product Lead for Levis Licensed Sports Apparel told us Tuesday. “It was really successful so we had the opportunity to bring in all the teams in the league for the Super Bowl.”

The expanded launch—available at selected retailers next week and nationwide in the fall—comes hot on the heels of a black and gold Super Bowl 50-themed collection that the brand released Saturday, which is now completely sold out.

Both projects are a part of Levi’s role as official partner of the Super Bowl 50 committee. The brand has naming rights to the stadium of this year’s big game in Santa Clara, California.

Levi’s will host the City Stage in Super Bowl City with a performance by Alicia Keys and other artists. That activation will close out with Keys’ performance on February 6th. The fan apparel project is longer term.

“For us, it’s about lifestyle and these iconic pieces from Levis that are basically customized to fit your team,” said Zloto. “They are great pieces that you’re stoked to wear, regardless what the teams details are.”

Amongst the new options are buffalo plaid shirts done in team colors with minimal branding at the hem, as well as a signature denim jacket.

“That’s one of the best selling denim tops, basically in the history of apparel.” Zloto asserted. “We’re just taking that concept and applying it to fan apparel.”

Levi’s sees the project as fulfilling an unmet need in the market. The announcement comes only months after Jimmy Kimmel announced his own line of sports apparel.

Levi’s designers wanted to ensure that fan affiliation was clear without evoking the polarizing nature of team jerseys. Expect new styles to be rotated in seasonally, as well as a standing permanent collection from the band.

As for Zloto himself, expect him to be stocking up on the 49ers gear. “Being from the Bay area, I’m definitely a 49ers fan. Our denim jacket is really the DNA of Levis so to add the team to it makes it an amazing piece.”