You’ll “Never Give Up” with these indestructible survival watches. 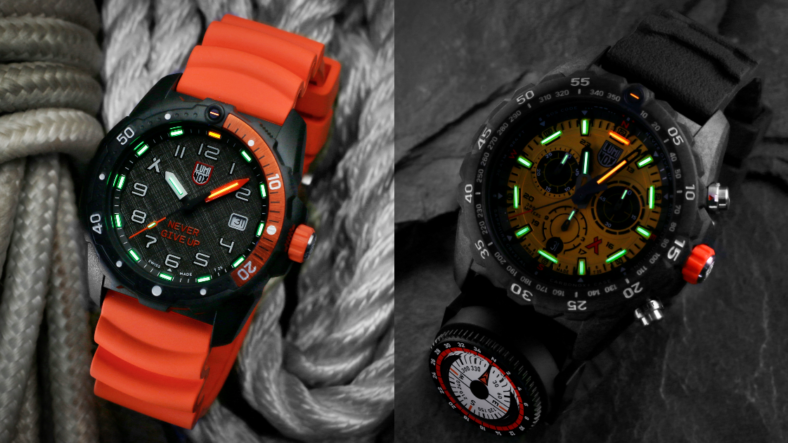 After all, former British special forces operator Grylls is the face of adventure. His post-military career has been spent traversing some of the toughest environments in the world virtually unscathed thanks to his masterful survival skills, which have been showcased on hit TV series like Worst Case Scenario and Running Wild with Bear Grylls.

These watches can pretty much handle anything you throw their way since Bear Grylls can too. Luminox’s own slogan is “Every Second Counts,” which harmonizes beautifully with “Never Give Up.”

Naturally, Grylls played a role in designing these watches to make sure they were ideal wilderness companions.

Luminox has enhanced the utility of these timepieces with the Bear Grylls-approved Light Capsule flashlight, which easily attaches to the Master and Sea wristbands, or any 24mm band.

Sold separately, Light Capsules are small but powerful, with 60LM of luminosity, a light range of 10 meters, a two-year warranty and the battery is included.

Below, a few details and specs about the watches from Luminox:

Master Series watches are water-resistant up to 300 meters (985 feet). They come in slightly larger 45mm cases — the Sea’s case is 42mm.

Additional features on both watches include stainless steel pushers for chronograph control and an anti-reflective coating. The Master Series watches also come with black rubber straps and a detachable compass already attached to the strap.

The Bear Grylls Survival Master series is $975. The Survival Sea retails for $495. The Bear Grylls Light Capsule flashlight sells separately for $35. Get yours now at www.luminox.com.