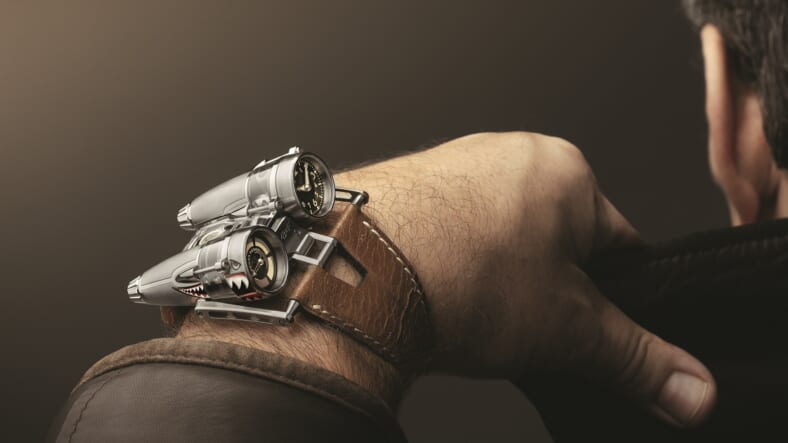 MB&F’s HM4 watch–or to use their preferred term, Machine–is anything but conventional. Inspired by aviation design, the watch- (and clock-) maker first released this radical design in 2010 with the HM4 Thunderbolt. It would go on to win Best Concept & Design Watch at the Grand Prix d’Horlogerie de Genève.

And its legacy would endure–in 2019, the New York Times placed it in a list of 10 watches that embodied modern watch design.

To celebrate the 10th anniversary of the HM4’s introduction MB&F took their original HM4 prototype and turned into a “Pièce Unique”–a singular creation: the HM4 “Kittyhawk.”

The name comes from a version of the WWII-era Curtiss P-40 Kittyhawk fighter, considered one of the most effective warplanes and still an icon among aviation enthusiasts today. One of the reasons the Kittyhawk secured a singular spot in history was the nose art–a ferocious shark’s mouth and glaring eyes.

To transform the HM4 prototype, MB&F first prepped the 10-year-old prototype’s titanium case through a microscopic scraping process. Then they hired miniaturist painter Isabelle Villa who painted the classic teeth and eyes. Villa’s work was then fixed with a top coat of clear varnish.

The end result truly lives up to its name–it’s one of a kind and a truly clever nod to the airborne legacy that inspired the shape of the HM4 model in the first place.

Unfortunately, the singular Kittyhawk design isn’t available as far as we know right now and due to their meticulous construction, MB&F Machines are always limited editions anyway–sometimes just eight pieces.

But you can learn more about previous HM4 models like the Thunderbolt and the Double Trouble here: www.mbandf.com/en/press/horological-machines/hm4.