This $95,000 Watch Is Made From the Blackest Stuff on Earth

It’s coated in Vantablack, which is the next darkest thing to a black hole. 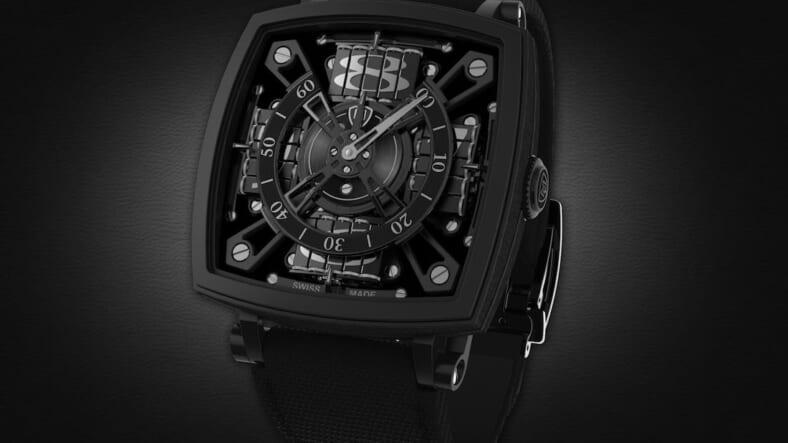 Nothing can escape the gravitational pull of black holes, rendering them entirely invisible. While they can’t be observed by the naked eye, you will certainly stand out wearing the next darkest thing on your wrist.

Swiss watch giant MCT has made a limited-edition luxury watch coated in Vantablack, which is apparently the blackest substance on earth.

Vantablack, first engineered by British scientists in 2013, is virtually weightless and absorbs more than 99.965 percent of light (damn). This means that any three-dimensional object it covers becomes a mere shadow.

Case in point, one YouTuber uploaded a rotating mold of his head coated in Vantablack, and it’s like the thing got sucked into a wormhole.

Likewise, the crumpled surface of aluminum foil appears entirely flat due to the material’s light-sucking quality.

The groundbreaking timepiece, dubbed the S-110 Evo Venta Black, will use the bizarrely black substance sparingly. Vantablack will only go on the dial and several parts of the movement. It would be cool to see the entire watch doused in this stuff, but Vantablack is notoriously tough to work with.

It is not a paint or a dye that can be slapped on willy-nilly but rather an exacting compound of carbon nanotubes. Objects must be heated to around 400 degrees celsius for Vantablack to be applied to their surfaces. This makes super-black T-shirts or even dresses out of the question.

The rest of the titanium timepiece will be just as complicated. The watch will work with a manual hand-winding movement of 471 components, the same as the one on MCT’s Sequential One S110. You can see how that all works, below:

Elsewhere, British sculptor Anish Kapoor has been given exclusive permission to coat a massive sculpture in Vantablack, which he says will be so dark that it “will be like seeing inside ourselves.”

Only 10 S-110 Evo Venta Black watches will be manufactured, and is set to be a black hole for watch aficionados’ bank accounts as well, courtesy of its $95,000 price tag.