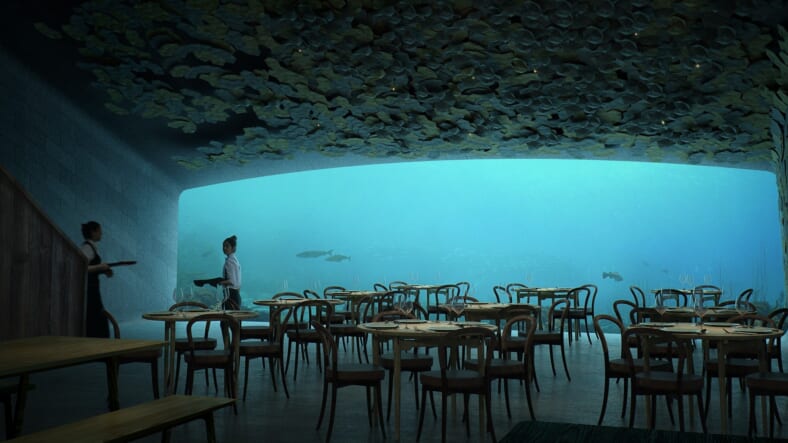 When completed it will look from a distance like a remarkably symmetrical giant sea creature surging onto land.

It’s simply called Under, and will be Europe’s first underwater restaurant.

Made out of concrete, the structure has been designed by Snøhetta. On their website, this architectural and landscape workshop gives a compelling explanation of the restaurant’s simple name:

Under’s namesake holds a double meaning: In Norwegian, “under” can just as well be translated into “wonder.” Half-sunken into the sea, the building’s monolithic form breaks the water surface to lie against the craggy shoreline.

More than an aquarium, the structure will become a part of its marine environment, coming to rest directly on the sea bed five meters below the water’s surface. With meter-thick concrete walls, the structure is built to withstand pressure and shock from the rugged sea conditions.

Like a sunken periscope, the restaurant’s massive acrylic windows offer a view of the seabed as it changes throughout the seasons and varying weather conditions.

The designers also intend Under to be used for marine research. More interesting, it will also serve—due to its structure and location—”an artificial mussel reef that functions dually to rinse the sea and naturally attract more marine life.”

The restaurant will accommodate 80-100 people, who will be protected from the sea by a  36 x 13-foot acrylic window.

As visitors and customers enter, descending three levels to the dining area, they’ll be able to read informative plaques about marine life along the coast of Norway, which they then can view through the acrylic wall.

Frankly it seems like it might feel strange to dine on Lutefisk while fish are eyeballing you, but people regularly eat lobster as a tank full of the crustaceans sits nearby, so no judgment here.

When construction on Under is complete, it sounds like a very solid stop on a future trip to Norway.