Tactical jungle boots that are ready for anything. 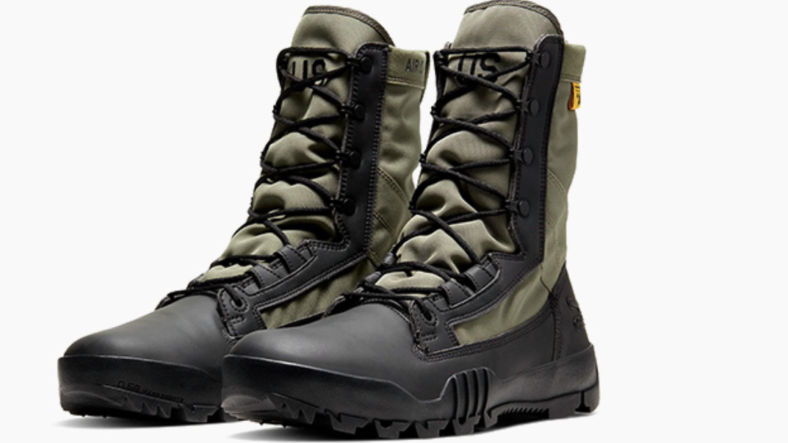 The name Nike is synonymous with athletic wear, but that’s not all they do. The company has produced “tactical” footwear for some time now, and their new limited edition SFB Jungle WP boots don’t take their design inspiration from the track or field so much as from the rice paddies and swamps of Vietnam.

The Jungle boots were made from two very different sources of inspiration, reports HiConsumption—Army football and the highly-decorated Army 1st Cavalry Division.

The boots’ style number is M-1966 and its military pedigree is unmistakable in the crossed sabers on the foxing, the silhouetted choppers on the collar and a logo on the tongue that is reminiscent of the West Point military academy.

Nike’s Nike SFB Jungle WP Tactical Boot imitates the 1st Cavalry style down to bold graphics inside the right boot based on the military-issue footwear’s sizing format. The outsoles are designed for grip and toughness and the boot comes with dynamic lacing to ensure the most snug, secure fit possible.

The tactical gear that makes up Nike’s Special Field System collection doesn’t just honor its military origins. Bill Bowerman, who co-founded the company, was also a World War II veteran—part of the 10th Mountain Division, which saw some of the toughest combat of the conflict as it fought its way across Italy and into Austria.

It’s unlikely the average consumer will need a pair of these for anything that hardcore, much less swamps and actual jungle terrain. They might see you well through a seriously muddy obstacle course event or just a day in the woods, though.

You can buy the SFB Jungle WP online now at Nike.com for $200.