Athleisure-inspired suiting, herringbone and all-season white pants are on point. 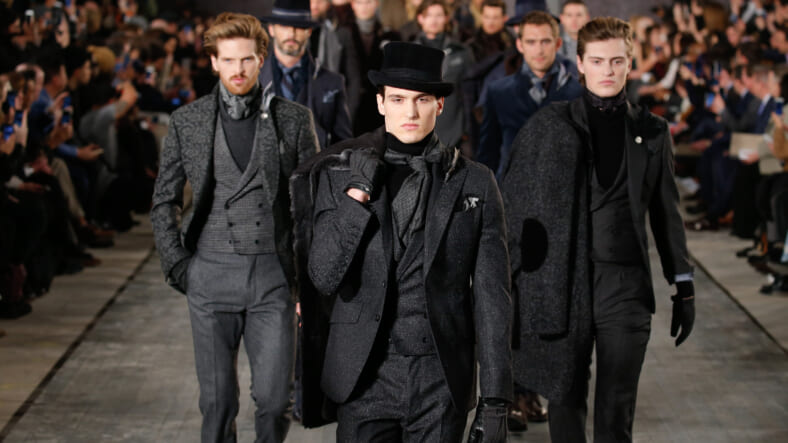 While the emergent style trend of staying cozy is kind of fun, so is looking great in a suit. Sure, men have seemingly been wearing this sartorial armor since the beginning of time, but every season designers try to do something new with the classic look. On day 2 of New York Fashion Week: Men’s, designers offered up suiting in a myriad of ways (Duckie Brown opted for jackets under blazers instead of shirts). Here, some runway looks that caught our eye.

Having just picked up an award from Fashion Group International, Donrad Duncan’s Engineered for Motion brand is on a roll, and with good reason. The designer has taken the ongoing athleisure trend and cut it into clean silhouettes for the most discerning of customers. “This is basically an expression of my lifestyle,” Duncan said at his presentation. “It’s also the lifestyle of most guys I see today. It’s created around the urban lifestyle, based on our consciousness today about how we consume and how we work.”

To make that reality, the designer showed a line-up of luxury pieces made from technical fabrics. Think: knit blazers that stretch and dress trousers in the form of slim cut cargo pants with elastic ankles.

Day 2 of Men’s Week got it’s start filled with herringbone at the Joseph Abboud show. In his American Savile Row range, the designer served up a bevy of three piece suits featuring everything from washed velvet blazers to Made in the USA fedoras. But it was the Harris Tweeds herringbone prints that blanketed everything from suits to shoulder zip sweaters, riding gloves, slippers and even the walls of the runway show itself that caught our attention.

If you’ve still been holding on to that old canard that you can only wear white pants after Easter Sunday and before Labor Day, it’s time to wise up. On the first day of Men’s Week, Suitsupply showed a line-up of smart, Mark Rothko-inspired tailoring. Our takeaway? White pants aren’t just on option for the warmer months. Paired with a black trench coat or blazers in either navy or done in a windowpane suit, it’s a clean look, even in the dead of January. For those who just can’t bring themselves to do it, the brand did show a few “off-white” looks as well.

Stay tuned for two more days of NYFW:M coverage and follow us on Snapchat (MaximTV) to watch the shows live.