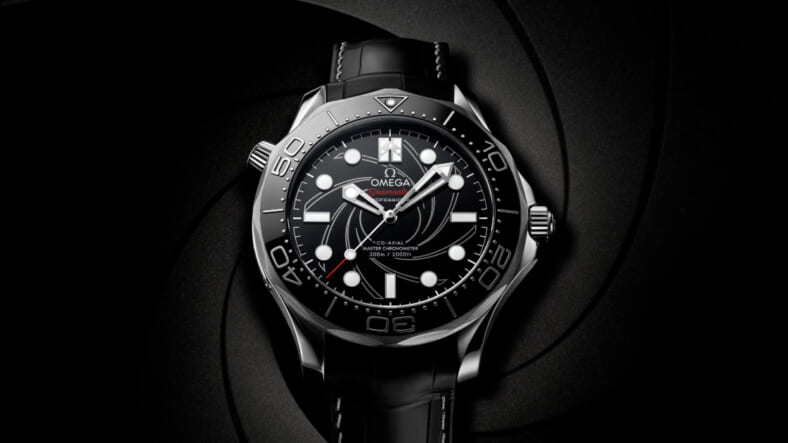 From GoldenEye in 1995 up to the forthcoming No Time To Die, James Bond’s go-to watch has been an Omega. With this new Seamaster Diver 300M Numbered Edition, the 007 movie legacy of luxury plus high tech continues in style.

This Seamaster is a part of the Omega James Bond collection first launched in 2019. As befits a spy’s preferred timepiece, it has some secrets—like the number 50, which is hidden in the Super-LumiNova at the 10 o’clock mark. That’s a nod to the classic Bond flick starring George Lazenby, On Her Majesty’s Secret Service, which first premiered 50 years ago.

There’s also a 007 logo at the 7 o’clock position and 18K white gold detailing on the hands, number indexes and the Bond coat-of-arms at high noon.

On the reverse side of the watch is another laser-engraved Bond shield. It’s platinum-filled and sits on a sapphire caseback, which reveals the inner workings of the watch, a Co-Axial Master Chronometer Calibre 8807—a movement that Omega states is “certified at the highest standards of precision, chronometric performance and magnetic resistance.”

Anyone lucky enough to snag one of these Seamaster Diver 300M James Bond Numbered Editions will receive their watch in a Globe-Trotter suitcase with NATO-inspired straps. It comes with a practical rubber band as well.

This sleek-looking dive watch is available nationwide at Omega boutiques. It retails for $51,900. Find out more here: omegawatches.com.