This gorgeous gold upgrade of the Speedmaster Buzz Aldrin wore when the U.S. launched its legendary mission on July 16, 1969 boasts an actual piece of lunar meteorite. 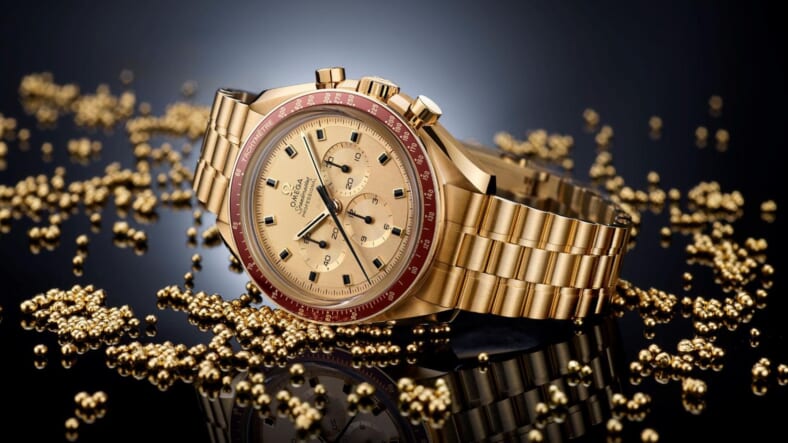 Omega is honoring the first men to walk on the moon with a luxurious new take on their classic Speedmaster watch.

First, a little history. The Apollo 11 astronauts who planted the American flag on Earth’s only natural satellite in 1969 were wearing the Omega Speedmaster Professional—Omega became the NASA’s official supplier of watches after the model emerged as the sole ticking survivor of several punishing tests.

Upon the return of Neil Armstrong, Buzz Aldrin and the crew, Omega commissioned commemorative Speedmaster Professionals crafted from 18-karat gold. The watch, model number BA145.022, was presented to Apollo 11 operatives and President Nixon.

For all its bling, the watch’s most striking feature is a transparent caseback that reveals a manual-winding Master Chronometer calibre-3861 movement, which is based on the original’s calibre-861 movement.

The caseback’s inner ring is inscribed with the words “Apollo 11 – 50th Anniversary” and “The First Watch Worn on the Moon,” and includes a partial image of the American continents opposite an actual piece of lunar meteorite.