The Swiss watchmaker is celebrating the 51st anniversary of man landing on the Moon. 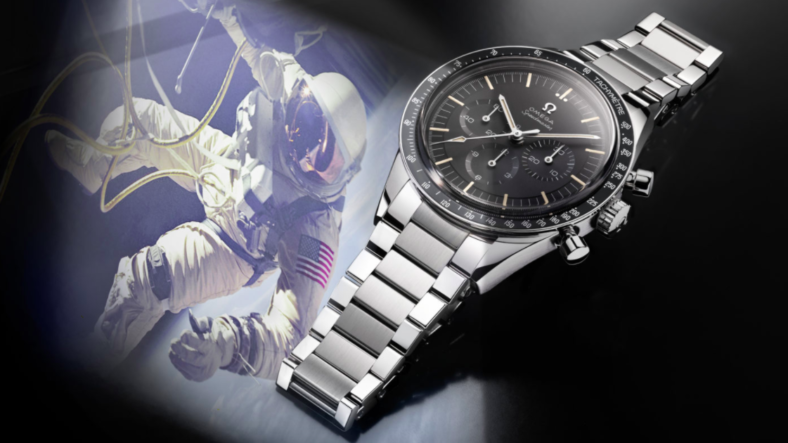 It’s been just over 51 years since Apollo 11 touched down on the Moon and Neil Armstrong stepped into the lunar dust and history. Omega is celebrating this hallmark and their part in it as the timepiece of choice for the mission by recreating the Speedmaster model in use at the time.

The luxury Swiss watchmaker will be issuing an updated Speedmaster Moonwatch 321 with an updated version of its original 60s-era movement in a stainless steel, 39.70 mm case.

The new Speedmaster certainly echoes the OG design in styling, with a black ceramic bezel ring and white enamel tachymeter scale. The elegant Moonwatch hands have returned and Omega subtly brought back a retro version of their logo.

All that said, Omega’s secret sauce here is that collector favorite, the 321 caliber movement. It was standard for nearly 20 years, 1949 through 1968. The watchmaker dropped it around 1969-70, but after years of research chose to resurrect it for this reboot.

And it was legit research, including digitally scanning an authentic astronaut’s Speedmaster from Apollo 17 to map the workings and reproduce a truly authentic Moonwatch.

In watchmaking, it isn’t exactly that odd to return to the old but good way of doing something—and the 321 was certified for NASA use in part because it was just such a high-quality, reliable movement. Had the space agency not been accomplished at evaluating great equipment, it wouldn’t have made it to the Moon in the first place.

The new Speedmaster Moonwatch 321 is manually-wound with 55 hours of power reserve.

Learn more about it at omegawatches.com, where it retails for $14,100.