“We’ll see you on the other side.” 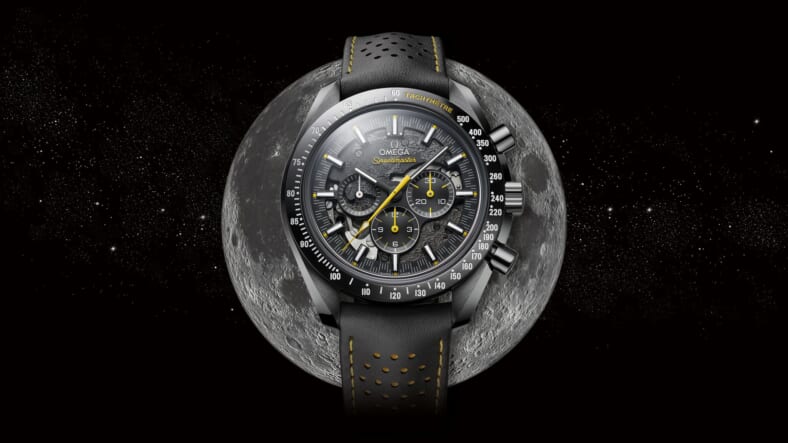 America first really scratched the itch to leave the atmosphere and travel to another planet on December 21, 1968, with the launch of the Apollo 8 mission to orbit the Moon.

That pioneering mission’s legacy was perhaps eclipsed by Apollo 11’s landing later in 1969, but with their new Speedmaster “Dark Side of the Moon” Apollo 8 timepiece, Omega is here to remind us that first mission was, in its way, truly iconic.

To emphasize this, the watchmaker has engraved a quote from Apollo 8 pilot Jim Lovell on the bottom of the watch, words that deserve a unique place in moonshot history: “We’ll see you on the other side.”

Those were Lovell’s last words to NASA mission control just moments before the orbiter successfully traversed the dark side of the Moon, out of radio range.

The Omega Speedmaster legacy is an integral part of space travel history—Neil Armstrong wore one on Apollo 11, as it was the preferred NASA timepiece due to its reliable performance and durability.

The Dark Side Speedmaster is a recognizable evolution of the line, but its sleek design and color puts an elegant, dressy spin on a watch originally designed for practical applications. Omega has deconstructed the original, with a skeletonized dial that gives an intriguing look into a precision laser-cut interior.

The watch is designed to represent the dual nature of the Moon—the gray-faced companion we see from the surface of the Earth and the shadow world astronauts see while slingshotting over the night side before returning home.

To wear this special edition Speedmaster is to make a real connection with space travel history and honor the professionalism and courage of astronauts like Neil Armstrong and Jim Love.

Go here to learn more about the Speedmaster “Dark Side of the Moon,” and get your own for $9,750.