Now Is the Time to Cop these Ultra-Rare Omega Watches

This is one hell of a lineup. 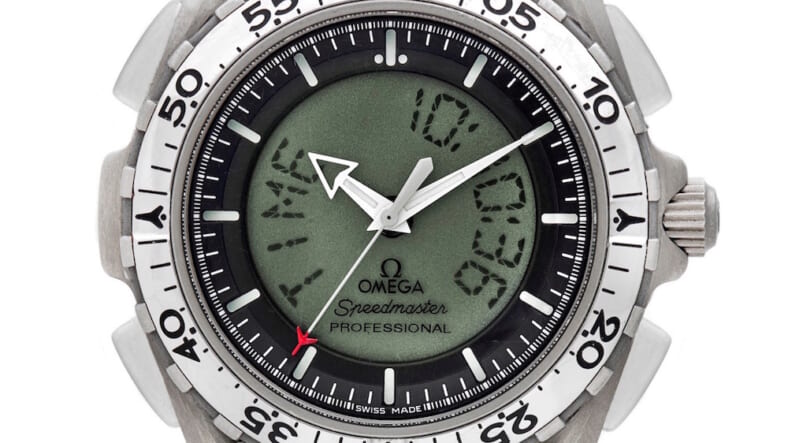 An Omega timepiece is the ultimate mark of a thrill-seeker.

The prestige Swiss label got its fast-and-furious cred in 1932 when it was named the official timekeeper of the Olympics. Then, Buzz Aldrin donned an Omega Speedmaster for the moon landing in 1969, earning it the nickname “Moonwatch.” Now, the timepiece is most commonly associated with a certain 007 secret agent, who’s favored Speedmasters since the 1990s.

Christie’s auction house has one of the best stashes of vintage Omegas around. Senior Watch Specialist Eric Wind told Maxim, “There’s been a big explosion in vintage interest. It used to be really focused on Patek Philippe and then Rolex, but as those values have gone up and more collectors have flooded into collecting vintage watches, other brands have had similar booms, and Omega is definitely one of them.”

Christie’s has jumped on the Omega bandwagon and is following up December’s $1.3 million Speedmaster auction with another sale, this time featuring various Omega models. The online auction ends on February 9.

One top lot has even been to outer space.

While this batch caters to Christie’s discerning clientele, this auction is also the perfect place for anyone to begin a collection. Wind said, “We’re continually looking for new customers. We even have some of these watches starting at $500, which is a great price for some of these rare Omega watches.”

Make your bids on Christie’s website if you’re feeling up to it. Below, check out some of the remarkable timepieces currently up for grabs.

Although this is a digital watch, it was designed in the traditional Speedmaster style. This particular watch belonged to Russian cosmonaut Sergei Zalyotin, who brought it along on missions to both the Mir and International Space Stations in 2000 and 2002, respectively. While it has patina in spades, it’s first and foremost a stellar piece of wrist candy.

Wind said, “[Omega watches] remain so popular today because they’re very modern. They’re big, easy to wear, and durable rather than petite dress watches that aren’t quite as appealing to a younger generation.”

Speedmasters typically utilize steel, but this limited edition piece has upped the ante with white gold. It was created in 1994 for the 25th anniversary of the Apollo 11 Mission and is one of 500 of such watches made.

Wind said, “There is a real rarity as well with these pieces because sometimes we can say for a fact we know three of these were made or only one of a model was made, so that is something that can’t be recreated.”

Here’s the wild card of the bunch. In stunning pink gold, this Omega Constellation was originally gifted to an American man in 1957 by the Hākim of Bahrain, Sheikh Sir Salman II bin Hamad al-Khalifa. While the conspicuous coloring indeed turns heads, it also bespeaks Omega’s commitment to elegant and classic designs.

According to Wind, we don’t commonly see such one-of-a-kind pieces these days, when “watch companies are owned by luxury conglomerates that are approaching things more from profitability rather than in the days when these were much smaller companies that were tailoring their goods for specific clients.”

The Seamaster was first unveiled in 1948. All the same, it remains a centerpiece of the Omega lineup for its clean dials and sharp, modern looks. This one dates back to 1968 and is endlessly versatility.

“The other thing about Omega is that they sort of fit into this tool watch aesthetic that is really popular,” Wind said. “They’re bigger watches, chunkier watches, and chronographs, as well as dive watches.”

This one hasn’t got the same history as the others, but it’s certainly part of a long Omega tradition. This Seamaster was manufactured in 2005 as part of a limited edition collection for the 2006 Olympic Winter Games in Turin, Italy. Though it stands out with blued steel hands and red numbering, it most prominently evokes the Olympic games that gave this watchmaker its cred.

Check out the rest of the pack on Christie’s website. But act fast, as the gavel comes down on February 9.